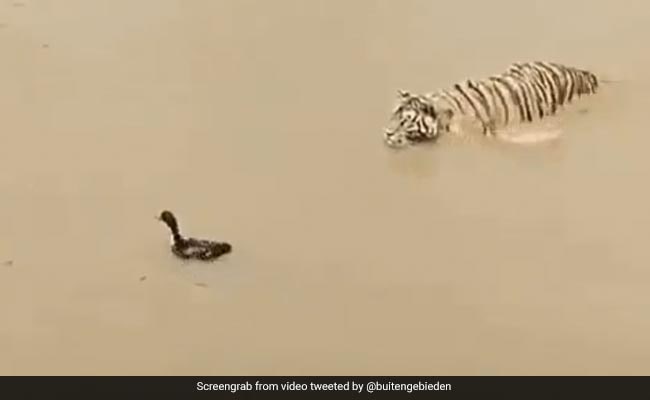 A tiger is seen sneaking up on a duck.

A duck giving a hungry tiger a slip is attracting eyeballs on social media platforms. The short 10-second clip has been viewed more than 2.5 million times.

As the video starts, a hungry tiger is seen approaching a duck swimming in muddy water. The predator is very carefully moving towards the bird, which appears to be unaware of the looming threat.

But as soon as the tiger gets ready to attack, the duck takes a dip and disappears in the water. Surprised, the tiger looks around but can’t find the bird.

The camera too moves and soon captures the bird emerging behind the tiger and safely exiting the danger zone.

The video has been shared by Buitengebieden on Twitter, but the location has not been revealed.

“It seems ducks are generally smarter than tigers,” one user tweeted. “Duck was so confident that it didn’t even bother to fly away. Just leisurely paddling away,” said another.

Others were, however, angry claiming that wings of ducks are clipped by some zoos and thrown into the pool for tigers and entertainment of visitors.

These users also posted links of some YouTube videos, which show a duck giving a slip to not one but three tigers in a zoo in China.

Earlier this week, another video showing a group of turtles balancing on an unstable log in a river grabbed the internet’s attention.

As the log rolled back and forth, the turtles were seen sliding off and falling into the water.