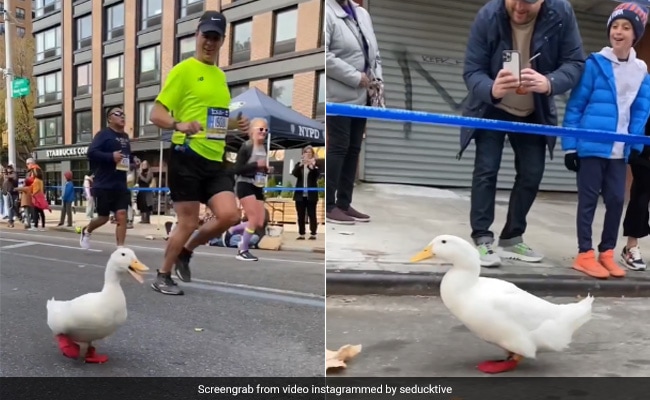 Have you been lazing around your house a bit too much these days? Well, maybe it’s time you put on your running shoes and start preparing for the various marathons that take place during winter. Still, if the idea sounds too intimidating, here’s something to inspire you. This year, TCS New York City Marathon had a unique participant in the race. The popular marathon featured a duck who ran the race alongside humans. Interesting, isn’t it? An Instagram handle named “seducktive” posted the video of the duck, that’s called Wrinkle.

In the video, we see Wrinkle the duck running and quacking its way through the streets of New York. The unique runner is making heads turn. Not only are bystanders cheering for the duck, but other participants of the race are also seen giving a quizzical glance. We couldn’t stop noticing the red shoes that the duck wore while running.

The post read, “I ran the NY marathon! I’ll get even better next year! Thanks to all the humans that were cheering for me!”

Here is the video that is sure to make your day:

The post has won over 62,000 ‘likes’ on the social media platform, where it has been viewed over 1.8 million times since being shared two days ago.

Users were delighted by the duck’s adventures and left praises.

One user commented, “This is incredible!”

Another user was amazed at the way the duck was comfortable amidst a noisy human crowd and commented, “So comfortable with so many humans. Amazing!”

One user wrote, “The hero we’ve been waiting for.”

Another noticed the duck’s red footwear and wrote, “I need Wrinkle’s brand shoes.”

The page that shared the video features the duck’s life events.

One user, who might have followed the duck’s earlier endeavours, wrote, “Is there anything you can’t do?”

This isn’t the first time that an animal or bird has caught our attention at a marathon. A few years ago, a half-marathon in Australia witnessed an unusual participant. A dog joined the race and also won a medal for finishing the marathon in two-and-a-half hours. Of course, the canine won the hearts of many spectators and human participants at the marathon.