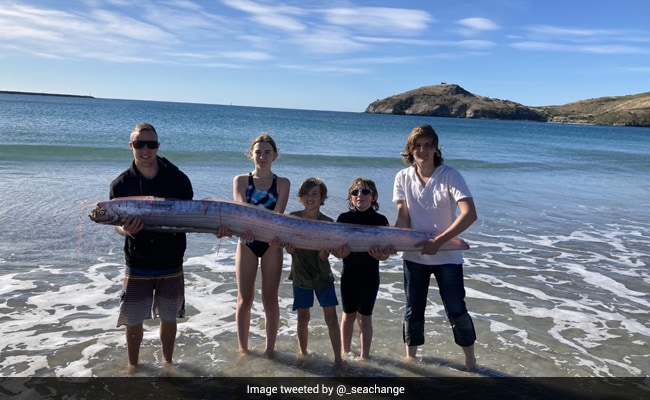 An extremely rare, giant serpent-like creature from the deep sea recently washed up on a New Zealand beach. According to media outlet Stuff, a marine biologist was relaxing on a Dunedin beach, when she noticed a beachgoer investigating something in the shallows. Dr Bridie Allan, of the University of Otago, investigated the mysterious discovery by Isaac Williams and instantly recognised the species.

“As soon as I saw it I knew it was an oarfish,” Dr Allan said, as per Stuff. She shared the video the fish on her Twitter handle.

The video shows the fish lurking in the shallows. “Woah, it feels like a shark,” Mr Williams can be heard saying. “It feels like a dolphin thing, look how long it is,” he added. The fish’s gills can also be seen flapping slightly as it fights for air.

Oarfish is a serpent-like sea creatures and they are normally found in deep water, as per the report. Dr Allan said that an oarfish to be floating in the shallows of Aramoana Beach was not a good sign. She informed that the fish was alive but very clearly distressed. “It was very weakly alive,” Dr Allan said, adding that the fish was around 3.6 metres long.

Isaac Williams tried to help the oarfish start swimming, however, it kept on floating on the surface. Dr Allan said that the fish wouldn’t have survived as it was on its “last legs”. She added that there were some deepwater canyons off the coast of Otago but whether it came from there is “pure speculation”. Separately, speaking to Newsweek, Dr Allan said that she did not end up taking the fish as a specimen, but she wished she had done.

An ANZAC oarfish found on Aramoana beach, Dunedin. How common are these in the south? pic.twitter.com/1dlnHPxBko

According to Stuff, Emma Burns, curator of natural sciences at Otago Museum, said that one of the first specimens of oarfish was collected from another Otago beach, Moeraki, and sent to London in 1883. The specimen is now part of the Natural History Museum collection.

Ms Burns also said that pictures of the oarfish found by Mr Willams showed that it had lost some of the distinctive silver along its skin, suggesting that it had been bumping into things before it got washed up.