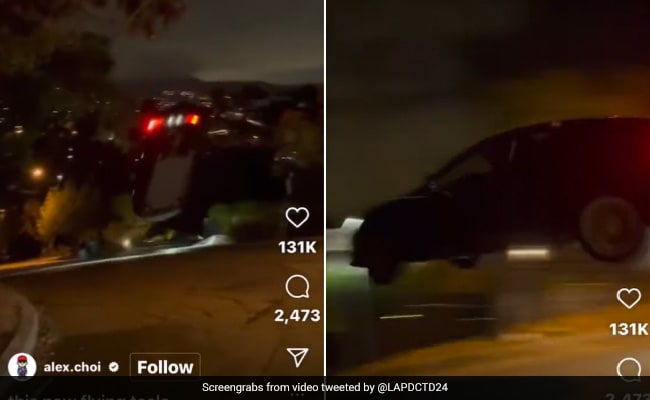 Hair-raising footage of a Tesla jump gone wrong shows the car launching into the air before smashing into two parked vehicles. The crash occurred in the Echo Park neighbourhood of Los Angeles, California, where the police offered a $1,000 reward for information leading to the offender’s arrest. The search for the offender, launched after videos of the Tesla jump went massively viral two days ago, may now have come to an end – popular TikTok content creator Durte Dom has claimed to be the man behind the failed stunt.

The Los Angeles Police Department said that the driver of a black Tesla performed a “dangerous stunt” on March 20. It resulted in the car colliding with several trash cans and two parked vehicles.

According to HITC, the stunt was recorded by several spectators at a Tesla meet-up who shared the clips on social media. It shows the car speeding down a steep street before launching into the air and crashing. The Tesla, reportedly a rental car, was abandoned at the scene.

The LAPD also shared the footage on YouTube as they launched a hunt for the accused, writing that “the Tesla was abandoned at scene. A misdemeanor hit-and-run was completed, and detectives will be following up with the renter.”

Video of the bizarre Tesla jump has gone massively viral online, racking up over 10. 9 million views on TikTok, according to several reports.

While police first shared the clip for information about the driver, they shared an update today saying they are no longer looking for tips and have been in touch with Durte Dom, whose real name is Dominykas Zeglaitis.

“We have reached out to him on his social media account. We are asking any witnesses to also come forward,” the department’s traffic division announced on Twitter.

We are asking the public to no longer send us any more tips regarding @dominykasor We have reached out to him on his social media account. We are asking any witnesses to also come forward. pic.twitter.com/vFBASt8MQD

“It never should’ve been done. I don’t know what they were thinking about. It could have gotten somebody killed,” Detective Juan Campos was quoted as saying by Newsweek.