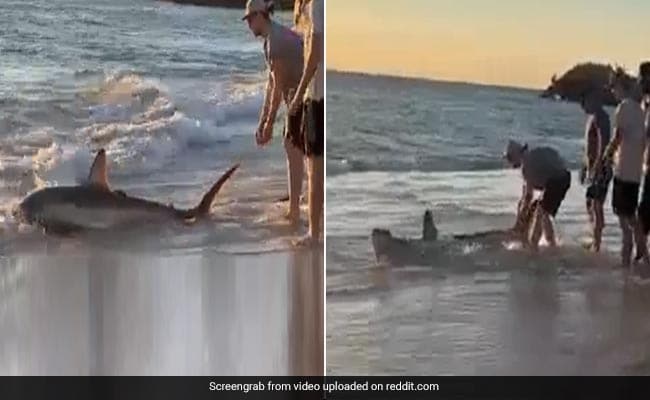 Mako sharks are classified as endangered.

A group of beachgoers on Sunday rescued a struggling beached shark in Perth, Australia. According to 9News, the group who were visiting Quinns Rocks saw the species, believed to be mako shark, which swim close to the shore.

A video posted on Reddit showed the distressed shark thrashing in the shallow water while opening and closing its mouth. In the same video, around seven men can be seen pushing the shark back into the ocean.

It is to mention that mako sharks are classified as endangered by the International Union for Conservation of Nature, as per 9News. Therefore, the group of men rescuing the species was indeed termed heroic deed by social media users.

While sharing another video of the same beached shark, a Reddit user even outlined the events. “It got helped, this was when it first beached itself and no one knew what to do really. 2m shark so they weren’t sure how to go about getting it back in the water or if it would bite,” they said.

Meanwhile, in another viral video, a filmmaker has managed to record the moment a shark chomped down on his camera, showing what it is like to be eaten by a shark. Filmmaker and conservationist Zimy Da Kid was shooting a documentary in the Maldives when a tiger shark circling around him took a bit of his camera. The video caught the inside of the shark’s mouth in incredible detail, with its huge teeth and gills visible.