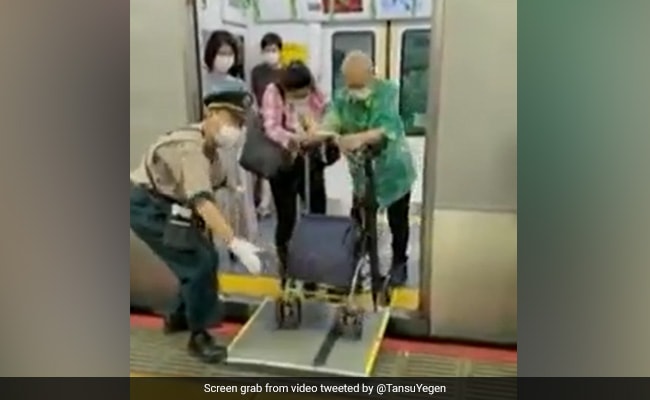 The 17-second video has amassed over a million views and eight thousand likes.

The Japanese are known for their punctuality in terms of their rail network. While rail staff and trains play an important role in system efficiency, passengers also play a role in keeping trains running on time. However, sometimes a human act goes a long way. A video is doing rounds on the internet where a railway official is seen helping an elderly get off from the train.

As per a video shared by Tansu Yegen on Twitter, a railway official can be seen putting a ramp between the train and the platform so that there are no gaps and the man, who is walking with a walker can deboard the train easily. The old man is accompanied by a woman who helps him deboard. What is heartwarming is that all passengers wait patiently for the man to walk and reach the platform. As soon as the old man reaches the platform, the man folds the ramp board and the train takes off.

The 17-second video has amassed over a million views and eight thousand likes. The caption of the clip reads, “Japan”. The user also added a blue heart emoji in the caption.

“Love how efficiently it works every single time. Each time a person with disability/wheelchair rides the train, swiftly it’s destination station is alerted with train & compartment number. A staff will be waiting to there to make his disembark easy with a portable ramp. Amazing,” said one user.

“Such kindness and respect.  I wish we could all be this way,” commented another person.

A third person said, “This is so very true! And everyone is staying in line waiting till everybody is out before going in. All very polite.”

Sharing some insight on Japanese culture, a user commented, “In Japan, Police are standing by to let blind people in an out of the subway. I once witness that and couldn’t believe it, loved it!”

“Words Are Misused”: After M Kharge’s ‘Ravan’ Remark, Advice From Within