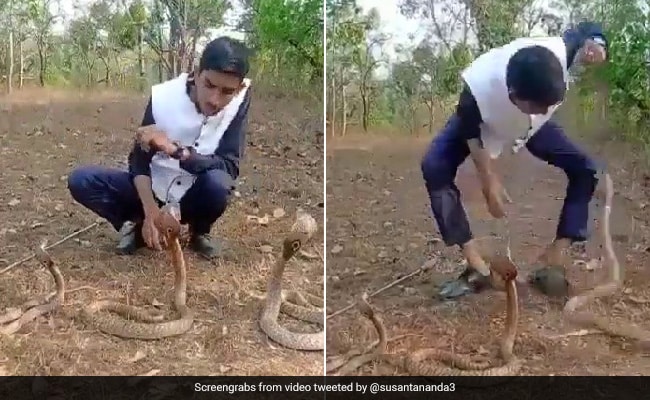 A Karnataka man’s stunt with three snakes ended badly when one of the serpents attacked him. Maaz Sayed, a snake enthusiast from Sirsi, was filmed handling three cobras in what many experts have described as a “horrific” manner. He was seen crouching in front of the snakes, pulling at their tails and moving his hands about – all gestures that the cobras could have perceived as threatening and reacted aggressively.

Unfortunately for Mr Sayed – whose YouTube channel is full of similar videos – this is exactly what happened. His most recent stunt ended on a terrifying note when one of the snakes suddenly struck him. Footage that has gone viral online shows the snake lunging at the stuntman and biting his knee. The reptile refused to let go even as the shocked man tried to pull it away.

Sharing the video on Twitter, Indian Forest Service officer Susanta Nanda criticised the snake handler. “This is just horrific way of handling cobras…The snake considers the movements as threats and follow the movement. At times, the response can be fatal,” he wrote.

This is just horrific way of handling cobras…
The snake considers the movements as threats and follow the movement. At times, the response can be fatal pic.twitter.com/U89EkzJrFc

A Facebook post shared by Priyanka Kadam, President and Founder of Snakebite Healing and Education Society, reveals that Mr Sayed was hospitalised after the cobra bit him.

Cobra is the common name of various elapid snakes, and all known cobras are venomous. In Mr Sayed’s case, he reportedly received 46 vials of anti-venom after his stunt went wrong.

Ms Kadam shared photos of the 20-year-old snake handler in hospital. “He is recuperating in a private hospital in Sirsi, Karnataka,” she wrote in an update shared yesterday. While Ms Kadam had earlier called for Maaz Sayed to be booked for “putting up content which is clearly an abuse of wildlife”, she later suggested that an expert could try guiding the youth.

“An expert can perhaps try guiding him. He wasn’t arrogant. Spoke respectfully. He is still unwell. Will connect with him once he fully recovers,” she wrote.

Atul Pai, a snake and an animal rescuer from Mangalore, also cautioned against similar stunts. “A young snake enthusiast Maaz Sayed from Sirsi, Karnataka got bitten by a spectacled cobra while he was showing off keeping 3 cobras and playing around with them,” Mr Pai wrote on Facebook. “This is a very popular stunt that many people follow and they don’t understand the seriousness of this! Unnecessary handling and playing around can lead to serious repercussions.”