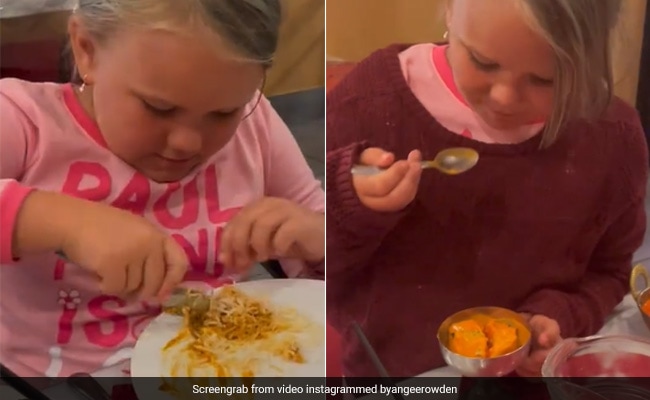 The video was posted in early April and has since received thousands of likes.

Indian food is famous all across the globe and it is renowned for its spices and aromatic flavours. There may not be many people who haven’t tried Indian delicacies in their life. Now, a little girl has also tried Indian dishes for the first time at a restaurant in Australia and her reaction has left internet users in awe.

“Trying Indian food for the first time is always an experience to share!” read the caption of the clip.

Watch the viral video below:

The video was posted in early April and has since received thousands of likes. In the clip, the girl is seen dining at an Indian restaurant, gorging on some rice with kadhai chicken. She is then seen trying some mango kulfi. After her meal, the girl tastes fennel seeds, or saunf, that is usually served at Indian restaurants.

Her reaction to tasting the mouth freshener is quite hilarious to see. The girl is even seen making friends with the restaurant servers as well, as she is seen talking to one woman.

Shared on Instagram, the post has been filled with users asking if she liked the food. One person said, “Mark my words, once you have a taste of Indian food. There is no going back.” Another wrote, “Hope she loved it.” “I bet she also loved the Mango…and i also don’t like Sauf(3rd one),” added third.

Meanwhile, in another viral video, an elderly couple from Karanataka has been breaking the internet. Serving unlimited meals at just Rs 50, the clip of the couple has taken the internet by storm. The name of the eatery run by the elderly couple is Hotel Ganesh Prasad or ‘Ajja Ajji mane‘ as it is called by locals.

The couple serves food daily from 12pm to 3pm in an all-you-can-eat format. For just fifty rupees, guests can relish a complete meal to fill up their stomachs.