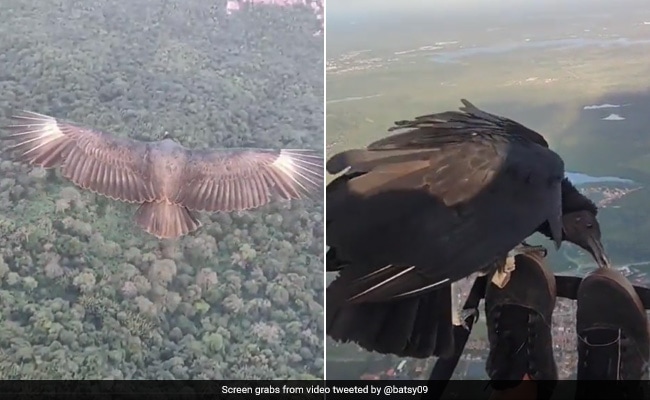 The video has been viewed more than 15.2 million times.

A video of a man paragliding with a black vulture has taken the internet by storm. The short clip has been viewed more than 15.2 million times.

In the video, one can see the black vulture calmly flying with a paraglider at a height of thousands of feet. Green forests and buildings are visible below. The bird is also seen adjusting its flight in the air by moving the rear part of its body (or the tail) up-down and right-left.

Seconds into the clip, the huge vulture is then seen landing on the paraglider’s feet, while the person starts caressing it.

At the end of the footage, the black vulture is seen biting into the glider’s shoes. The video has been shared by Twitter user Paul Nelson. The location has not been revealed.

In the comment section, one Twitter user informed that there is actually an activity that is called “Parahawking”, which involves paragliding with falconry. The birds are trained to ride with paragliders, the user said.

Other users were simply surprised to see the scene. “Magical. Peak life. Could not ever have a better experience,” wrote one user. “That is a once in a lifetime event. That is amazing,” said another.

A third user jokingly added, “Pretty sure that bird was assessing snackability right there. But WHAT a moment. Awesome.” “Don’t know how often that happens but how very cool to experience something like that. Of course, the altitude alone would be mind-blowing,” said fourth.

Meanwhile, another hilarious video featuring a bird went viral a while back. A clip of a bird flying away with a woman’s pizza left the internet in stitches. The post also prompted netizens to share their own experiences. “That happened to one of my sandwiches while sharing the beach with some birds! They were incredibly aggressive, swooping in for the grab while l was getting some water three feet away,” said one user.