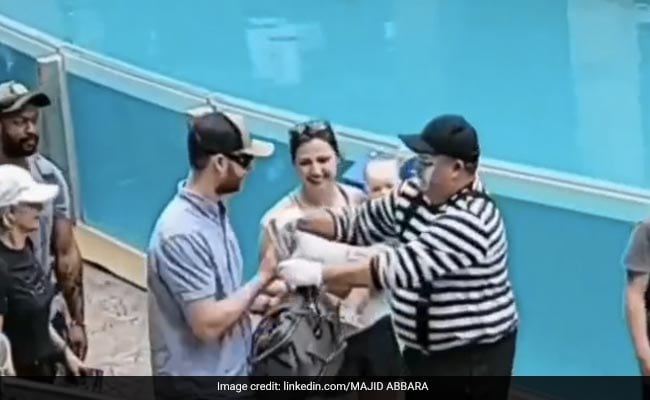 The mime took the bag from the woman and handed it over the the man.

Most of the couples in today’s world are working full time. When it comes to starting a family, both mother and father share the load on chores, disciplining and playing or doing activities with the children.

But there are some individuals who are often caught on camera not doing their part properly. One such video is going viral on social media, which shows a man being called out for not helping his wife enough.

The video was first posted on TikTok last week, and later made its way to LinkedIn and Twitter. On Twitter alone, it has been viewed more than one million times.

“Nice behavior from a stranger,” the caption of the video says.

The video shows a man dressed as mime stopping a woman at a water park carrying a child and a backpack on her shoulder. He then asks the woman and a man behind her if they are together, to which they reply in the affirmative.

The mime then shows the man how to be a good father, by picking up the backpack from the woman and placing it on the man’s shoulder.

The mime’s gesture sends the crowd into cheers. He pats the woman on the back as she laughs and the man walks away with a strange expression on his face.

The mime then walks with the couple for a short distance before making his way out of the shot. When the camera turns back to him, the mime is seen with a telephone-to-the-ear gesture and mouthing “call me”.

The video was originally shot by a TikTok user called Ernest at SeaWorld in Orlando, Florida, according to local media. He said the crowd had gathered to watch a seal show when the incident took place.