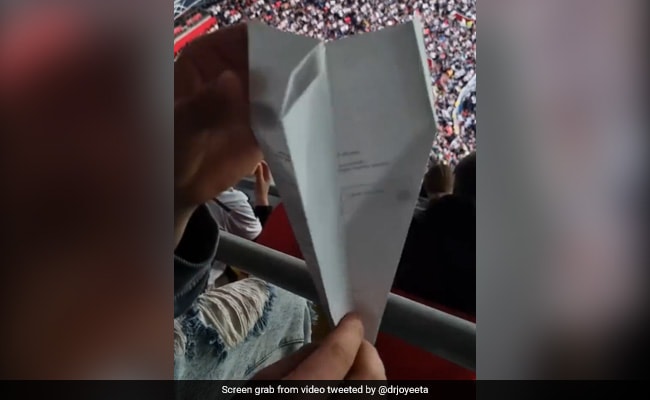 An old video of a football fan making a paper airplane and letting it loose during a match at a jam-packed stadium has resurfaced on the internet.

During a UEFA Nations League clash between Germany and England at Munich’s Allianz Arena in June this year, one bored fan made a paper airplane out of his match ticket. The fan launched the plane towards the players on the pitch from his seat which was located quite high in the stadium.

In the viral video, as soon as the fan launches it, the paper airplane “takes off” at surprising speed. It glides towards the players and stays in the air for an astonishing 25 seconds or so before making it past keeper Jordan Pickford and into the England net. The “goal” was cheered hysterically throughout the stadium with many claiming that the stunt was good enough for a Guinness World Record for the longest duration a paper airplane has ever travelled.

Social media was soon flooded with videos of the paper airplane landing in the back of the net.

“Incredible goal,” one person tweeted. Some even responded by saying that it was the highlight of an otherwise drab game.