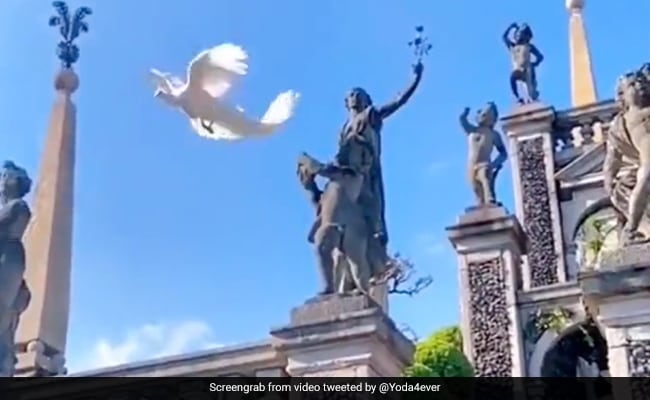 A rare white peacock can be seen flying down to the grass from a statue on top.

Peacocks are one of the world’s most beautiful birds, and with good reason. They appear stunning with their iridescent feathers, fan-shaped tail, and tall display of feathers on each wing.

A video is going viral where a rare white peacock can be seen flying down to the grass from a statue on top. The video has been shared by Yoda4ever” on Twitter with caption: “White peacock in flight.”

This video has been captured from the beautiful gardens of Isola Bella – one of the Borromean islands in Maggiore Lake near Stresa, Italy. White and coloured peacocks live free in the gardens here. The Borromeo’s Islands are a little paradise in the centre of the lake.

This video has received over 21,000 likes and over 2.5 lakh views on Twitter.

In the comments, users have shown their affection.

“Beautiful! In exactly that place, Isola Bella, I was bitten by a white peacock. So lovely, but so mean,” one such user commented.

“Kind of reminds me of a phoenix (just that it is in white)” another user commented.

“I remember seeing a white peacock around 10 years ago. Never seen it fly though. It’s beautiful” a third user commented.

White peacocks are an uncommon sub-species of blue peacocks with the Leucism gene mutation. Peacocks that are white in colour are born yellow and turn white as they get older. Partially leucism occurs in pied peacocks, resulting in colour loss in patches.