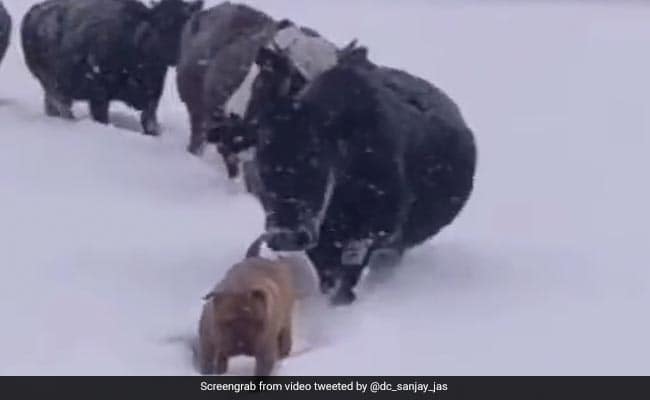 A video of a dog leading in front and clearing the snow-filled way for a herd of cattle is going viral on the internet. Posted by a Jharkhand PCS, Deputy Collector Sanjay Kumar on Twitter, the video is winning the hearts of social media users.

The caption of the post in Hindi read: “Netrtvakarta vah hai jo doosaron ke liye raah banaaye, phir bhale hee vah chhota ho ya bada (A leader is one who paves the way for others, be it small or big)?”

The video shows a dog clearing way for a herd of cattle, he even looks back in a snowstorm. The cattle can be seen following the dog.

Posted yesterday, the video has amassed more than 56,000 views on the social media platform. The post also triggered a lot of reactions from the netizens. A user commented, “It is very true. Leadership is a position, not a post.” Another user commented, “Perfectly said, sir.”

You must have come across plenty of dog videos on the internet, people love their cute antics and the loyalty they do possess for human beings.

Pets and their antics can certainly brighten someone’s day. Recently, an old video of a dog staring at his owner’s food while he eats dinner. The hilarious video has gained millions of views in just over a week.

The video shows a man eating his dinner on a couch while his dog lounges on the other side of the sofa. As the man takes a bite, the dog stares at the tasty meal. As the man turns his head in the dog’s direction, the pooch immediately looks away and tries to play it cool.