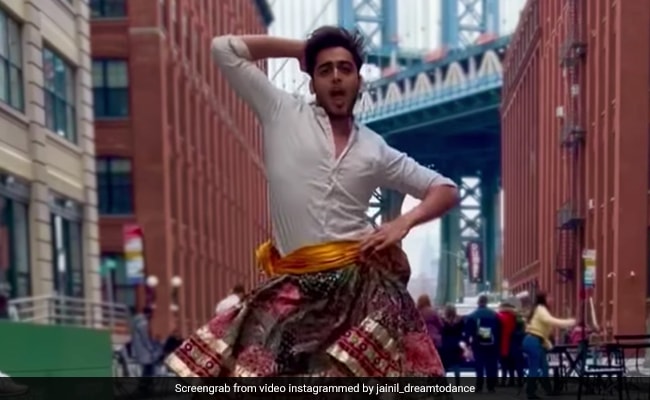 Jainil Mehta is seen dancing in skirt on a street in New York.

A video showing a choreographer from Mumbai dancing on a street of New York dressed in ‘Ghaghra‘ is winning the hearts of social media users. The choreographer, Jainil Mehta, chose the massively popular ‘Saami Saami‘ song from the movie ‘Pushpa: The Rise’ for his act.

“SAAMI SAAMI IS OUT FINALLY!!! Doing #meninskirts in DUMBO, Brooklyn was totally a vibe – especially in front of hundreds of people who were taking photographs and videos!” Mr Mehta said in the caption of the video he posted on Instagram.

The hit number has been sung by Sunidhi Chauhan. Mr Mehta is seen dancing at DUMBO (Down Under the Manhattan Bridge Overpass) in Brooklyn, sporting a shirt, a yellow dupatta around his waist, and a lovely ‘ghagra’ skirt.

The 22-year-old danced his heart out without a care in the world, which was appreciated by many Instagram users.

“Confidence,” a user commented. “You have lachak,grace,adaein,nazakat everything…complete performer…60 sec is not enough seriously,” another added.

Mr Mehta shared had earlier talked about his journey in a Instagram post, mentioning that he started dancing in skirts at a young age. “I began my dance journey when I was 7. I used to steal my mother’s dupattas and skirts, lock the room, play some romantic music and twirl.”

“I never realised why I locked myself up – probably because I felt it was strange for men to wrap around a skirt or cloth around the waist. I started wearing skirts in my dances. Dance has always made me feel secure and known and this was the perfect way for me to face my fear and the society,” he said in the post.

In another post, Mr Mehta said that he moved to Los Angeles to study dance professionally. “Even though I learnt mixed forms, I never abandoned my thought of wearing skirts. During my education, I learnt to be more free in my thoughts & speech. So, I randomly decided to use social media to face my fear of wearing skirts & started posting my videos. I thought ‘I want to be that carefree child again’.”

Allu Arjun’s ‘Pushpa: The Rise’ was one of the biggest films to release after theatres opened up in parts of the country following COVID-19. The film’s one-liners and songs were an instant hit with the audience, finding their way into several social media posts and memes.