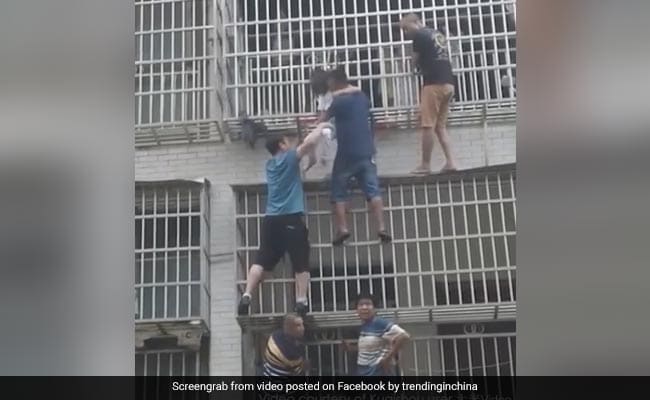 In China, six men came together to form a human ladder for a heroic rescue.

Footage going viral on social media shows the heroic rescue of two children from a burning building. The two girls in China were trapped inside a multi-storey building that was on fire. But six civilians came to their rescue. The third floor of the building in Xintian, Hunan, was on fire, trapping the two girls inside their house. Six men climbed the grills along the building’s walls with bare hands and formed a human ladder to rescue the children, local media reported. A video shows black smoke coming out of the building.

The video, shared by ‘Trending in China’, has gone viral on Facebook. The rescue act has been captioned as, “Six men climbed the wall with their bare hands to build a human ladder, rescued the children out of the window, and transported them to the ground.”

At the end of the clip, we see some firefighters near the building while the second girl was being rescued out of the window.

Many users dropped red heart emojis in the comments section.

One user, who went by the name, Near Ray, wrote, “Beautiful.”

Another user, ErwinRowel Boiser, appreciated the human compassion seen in the video and wrote, “God bless you all always. Amen.”

A third user, Denise Correa, posted a comment in Portuguese, which when translated to English, read, “The unity makes strength. Congratulations.”

Ohiafi Rafiu, another user, noticed the unconventional look of the building and questioned, “Why the bars in the first place?”

One user, Nguyen Hai, looked at the video skeptically and commented in Vietnamese. When translated to English, it read, “It’s absurd because there’s a firefighter below, but letting civilians climb for the rescue is a clumsy, artificially constructed scene.”

However, the video clip did not show any firefighters at the beginning of the rescue operation.