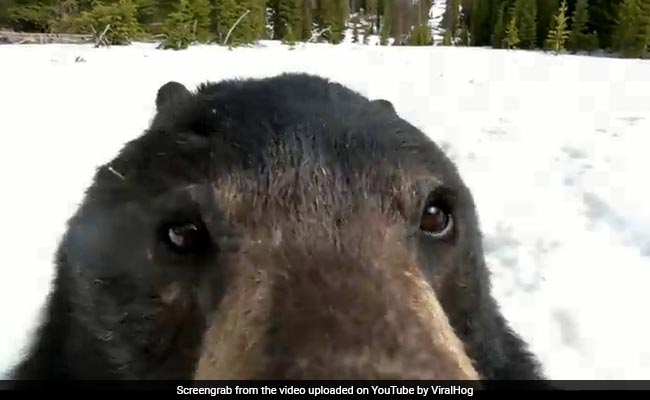 Footage that has gone viral online shows the moment a bear found a GoPro camera in snow and managed to turn it on. Here, we see that it got hold of a GoPro camera and fiddled with it, without knowing that all his actions were recorded intimately. Mistaking the camera for something eatable, the bear even tried to swallow it.The bear made several attempts to eat it but failed since it was not able to dig deeper to pull the camera out of the snow. Tired, it sat there and looked around, possibly finding its rightful owner.

All thanks to the bear’s adventure, a man found the lost camera in the snow in the Wyoming hills of the United States. Sharing his first-hand experience after watching the clip, the person wrote, “This GoPro had been sitting in the snow for a long time. When I finally found it, I charged it up and couldn’t believe what I saw. After four months of it sitting there, a big old black bear found it and not only managed to turn it on but also started recording himself playing with it. Hands down the craziest thing I’ve seen.”

GUYS A BEAR FOUND A GOPRO AND TURNED IT ON pic.twitter.com/BhN8oyw3F8

A Twitter user wanted to be friends with the bear.

I want the bear to be my friend.

Another said this could be the only time she would be able to see inside the bear mouth “in intricate detail”.

A third user praised the durability of the camera against such terrifying odds.

if that is not the best advertisement for the durabillity of a gopro that i dont know what will.

Check some more funny reactions below.

You got games on your phone ? pic.twitter.com/nxmicxuIbu

The person it was attached to: pic.twitter.com/nnjHLADkhx

The full video has made it to Viral Hog’s collection and is shared on YouTube. The bear continues to do interesting stuff. It manages to move the camera and lifts it up in its hands.