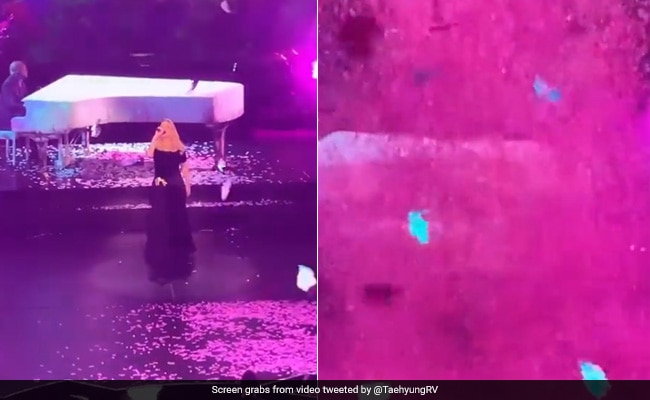 Fans also shared the messages written on the confetti pieces.

British singer-songwriter Adele started her rescheduled Las Vegas residency show with a bang. The 34-year-old singer received rave reviews not just for her performance during the show, but what is keeping the internet talking is her ‘magical exit’ from the stage. The last few seconds of her performance at the Colosseum theatre in Las Vegas are going viral on social media, where Adele made the dramatic exit, leaving the fans thrilled and confused.

Adele began the evening with her 2015 song ‘Hello’and went on to sing  Easy On Me, Rolling in the Deep, Skyfall and Set Fire to the Rain. The ‘Hello’ singer received a standing ovation at both ends of her performance.

The video which has surfaced on the internet shows the 15-time Grammy winner disappearing into thin air from the stage. The short clip shows as Adele waves goodbye to her thousands of fans, a pink cloud of confetti covers her and she appears to have vanished into thin air.

You: Face reveal when?
Us: pic.twitter.com/TVpWfgAVxb

The magical exit did confuse the fans present at the event and the social media users as well. The video which is widely shared on social media has garnered more than 1 million views with several comments. A user wrote, “I’ve watched over and over trying to figure out how the hell she did that.” Another user commented, “she’s a legend, she’s an icon and she’s the moment.”

The third user wrote, “I’m legit confused about how they did that so fast, is she okay down there?” The fourth commented, “She probably goes down into the stage. Something similar happens in Beauty and the Beast on Broadway and I still can’t figure that one out! I was sitting fairly close too! Lol” “When Adele disappeared into the burst of heart confetti I cried a bit. You really did that babes! @Adele. Singing your ass off AND a magic show as the finale??? You’re taking it!!!,” the fifth wrote.

Adele’s residency will last until March 2023. According to The Guardian, the singer will reportedly take a break from music after the residency ends to work on an online degree in English literature.