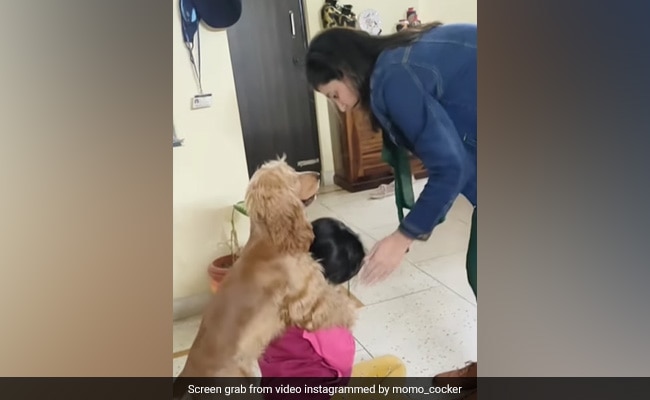 Dogs are extremely adorable creatures, who are also fiercely protective of their owners and people they love. One such video displaying a pet dog’s pure love towards a little girl is making the internet smile. The video shows a dog rushing to protect to save his sister when he sees the mother pretending to scold and hit her.

The video has been shared on a page called ‘Momo cocker spaniel’, the dog’s Instagram account. “Sister, I am always there for you,” reads the caption shared along with the video. The account also has several other sweet pictures and videos of the dog posing with its humans.

In the video, a woman pretends to get angry and proceeds to hit her daughter when their pet dog Momo barges in to save her. The dog, who is unaware that he is being tricked, puts his paws around the girl’s body in order to shield her from the woman’s blows. When the mother continues to scold the girl, the dog snarls at her, showing his sharp teeth in an act of defence, and tries to stop the woman.

The video has been posted on Instagram on November 28 and since then, has garnered several comments from people who couldn’t stop going ‘aww’. People adored the loyal dog and showered love on it for its defiant protection of its human.

On CCTV, Man Attacked With Sword Near Mumbai Allegedly Over Trade Dispute