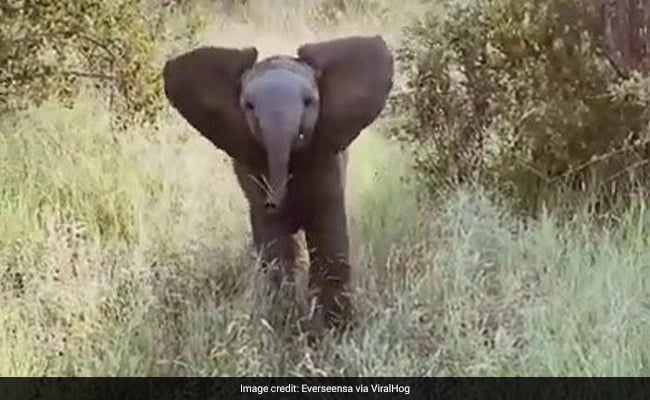 There’s a desire in all of us to act grown-up once in a while. It appears that things are no different in the animal kingdom. A video that has gone viral on the Internet features a baby elephant, which broke free from its family, trying to intimidate a group of safari tourists in the wild. The calf took a few steps and trumpeted as if it were charging, but then possibly realised it was still a few years away from showing its aggression. So, it nodded, flaunted its ears and retracted. But suddenly charged again only to stop and hide behind the bushes. This back-and-forth performance by the playful little elephant no doubt proved to be an exciting experience for the visitors.

“He’s coming, he’s coming, he’s coming,” whispered the tourists as the calf returned to them one last time. Finally, it presumably accepted the fact that it had failed to scare anyone. It soon lost interest and walked away from the onlookers, showed the video shared on YouTube by ViralHog. Published on Wednesday, it has received more than 4,000 views within hours and elicited several comments.

“The cuteness is overwhelming,” said a user with the handle HerbieTheKat.

Some found the elephant’s aggression a little premature and advised it to take it slow. “You have a few years to perfect your technique, little one!” said IntrepidFraidyCat

“He’s trying so hard to give him credit for not giving up,” said Wendy Haase.

One user wondered where the baby elephant’s mother was and asked tourists to beware of her.

“Oh so cute…but where’s the mom? She probably won’t stop just short of trampling anything if she sees you near her baby!” said J Price.

Recently, another video had gone viral on the Internet that showed a group of elephants savouring watermelons. A baby elephant from the group struggled to fit a slice of the juicy fruit in its mouth. Every time it tried, the slice fell on the ground, making viewers of the video chuckle in delight.