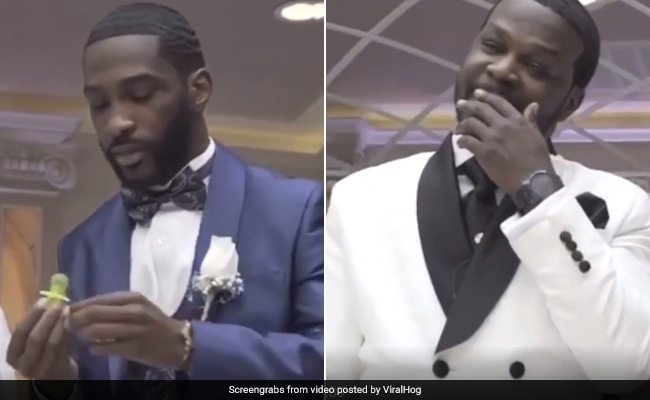 Bride and priest laugh, while the groom was not amused in the slightest by the prank.

A best man’s incredible prank at the altar has left internet users in stitches. A video shared by ViralHog shows the groom dressed in white turning over to collect his wedding ring from the best man. However, he is left embarrassed as the best man dugs his hand into his tuxedo only to pull out a baby pacifier.

The clip starts with the groom asking his best man to hand him the wedding ring. He even hesitantly asks him “don’t play”. But it’s safe to say that the warning was completely ignored as the prankster, wearing a purple tuxedo, opts to pull out a bright yellow pacifier and hand it over to the unimpressed groom.

The hysterical prank left everyone, including the priest, in splits. The bride even found amusement in the prank, while the groom, however, was not amused in the slightest.

Internet users, on the other hand, said that the “straight face” of the prankster made it so much funnier. Another wrote, “If you have to turn to him and say, ‘don’t play’ then you know what you’re signing up for making him the best man lol.” A third user jokingly said, “Yup, and everyone in that room knew exactly what was coming too, judging by the way they laugh as he reaches in his pocket.”

Meanwhile, not long ago, hotel staff pranked the bride and groom by dropping off a multi-tier wedding cake, while bringing it to the venue. Shared on Instagram, the video showed the reaction of the newlywed couple. But to everyone’s amusement, it later turned out that what the hotel staff dropped was just boxes decorated like cake.