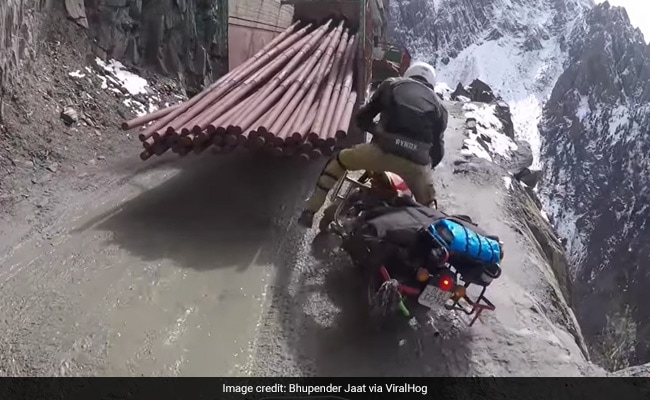 A motorcycle rider had a narrow escape while driving from Srinagar to Ladakh. As he rode through the narrow stretches of the Zojila pass, behind a truck laden with iron pipes, he lost control of his bike. The stretch was slippery and muddy, possibly due to snowfall. As the rider attempted to regain control, he approached the edge of the path and was about to slide off it, but managed to pull over just in time. The rider behind him captured the hair-raising moment on his camera.

The Zojila pass, that provides vital road link between the Kashmir valley and Ladakh, is considered to be one of the world’s most dangerous mountain roads.

The video begins with both motorcyclists following the truck and the majestic beauty of the snow-covered mountains on a snaking stretch. Suddenly, one of them decides to overtake the truck from the cliff side. The other rider warns him. “Dekh ke (watch out),” he says.

Not able to get enough space to move past the truck, the first rider abandons the plan but still drives along the edge. And before he can realise, he gets dangerously close to the iron pipes and loses balance. Failing to balance the heavily loaded motorcycle, he bends over the cliff. “Easy, easy, easy,” says the rider behind him.

The first rider somehow manages to hold himself back from sliding off the cliff but is unable to pull up the vehicle. The other rider then walks up to him and helps him get on the bike again. “At Zoji La Pass, we had this extreme close call and we’re lucky to be alive,” a message, which appears during the video, reads.

The video was shared by Bhupender Jaat. The incident occurred last month but was shared on the YouTube channel ViralHog on Sunday. It has clocked more than 5,100 views so far.

“Everything about this video is legit, life-threatening. The road, the truck, the cliff, the traffic behind. Attempting to pass seems about as reasonable as texting while driving. Oh wait…” commented one user.

“Mistakes or accidents happen when you rush… Please be careful all,” said another.

“Get that close and trying to bypass…mmm…the dude asking for a death sentence,” said a third.

But not everyone was that forgiving with their criticism of the rider.

“Who thought it was a good idea to not only get that close, but to try and pass them as well?” one user said.

“C’mon, man, get out of my way, truck! Don’t you know I have a hair appointment to get to!?” read a sarcastic comment.

“Absolute braindead riders. Why so close to a truck with huge pipes sticking out, pointing down right at you? What could go wrong?” wrote another.