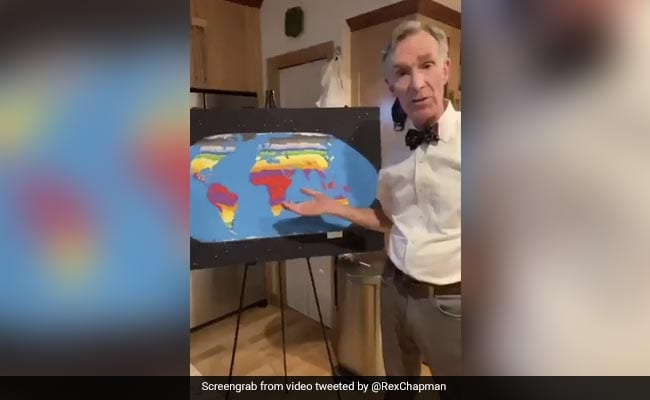 American scientist and entertainer Bill Nye is known for his simple ways to explain various tenets of science. This time, he explained racism through scientific theory. In a video posted by former American basketball professional Rex Chapman, we see Mr Nye explaining the reason behind diverse skin colours. Mr Nye is seen in front of a world map. The colour gradations on the map show how much ultraviolet light from the Sun falls on each latitude. The regions near the equator receive the most amount of sunlight and the concentration lowers towards the poles. Mr Nye shows us another map with different shades of brown. He says, “It turns out that everybody on Earth is descended from people that live here, in Africa.”

Mr Nye explains how different groups of humans dispersed around the world and adapted to their new environments. The skins were adapted in order to balance between vitamin D generation and folate breakdown. Mr Nye then says, “When the ultraviolet varies, the colour of our skin varies.” Towards the end, he says, “But we are all one species. But we are not treating each other fairly. Not everybody is getting an even shake. So it’s time to change things.”

Mr Chapman wrote, “Bill Nye destroying racism in one minute. ‘We’re all one species…” The video spread like wildfire on Twitter and has garnered more than 5.7 million views. Watch it below:

“We’re all one species.”…
pic.twitter.com/Moc7qLsjNq

This opened up a discussion on race and species on the microblogging platform. One user reiterated Mr Nye’s point by adding more insight into the evolution of homo sapiens. They wrote, “50,000 years ago, four sibling races sharing this world. Homo Sapiens, Neanderthal, Denisovan, Homo floresiensis. Now only we remain, and every single person on Earth is Homo Sapiens. One species, one race.”

Now only we remain, and every single person on Earth is Homo Sapiens. One species, one race.

— Brett doesn’t have time for your shenanigans (@BWiSfull) September 26, 2021

Another compared different animals belonging to the same genus and species. They wrote, “Genetically, we’re all the same.”

Genetically we’re all the same. Just like with many other creatures. In the same way that A German Shepard and a Doberman Pincer may look different but they’re still the same genus & species (canis familiaris), A Sphinx and a Maine Coon are also both still Felis catus.

“There shouldn’t even be a need to prove why racism is wrong,” wrote a person

While users found the video quite insightful, others were sceptical.

What from the last two years would make you think racists might be swayed by this rational scientific argument?

It’s so not destroying racism though. Racism is a power structure.

This user wrote, “There are and have always been those who will exploit our perceived differences for their personal gain.”

Seems so simple…perhaps too for some. But as we’ve seen recently, there are and have always been those who will exploit our perceived differences for their personal gain.

Someone also compared racism to the anti-vaccination drive.

Racism is just another shade of antivax, nothing to do with the science, it’s all about feelings.

Mr Nye is a mechanical engineer, science communicator and television presenter. He is best known as the host of the TV show Bill Nye the Science Guy.

Bill Nye’s video on racism was first published on his TikTok channel in 2020 and had gone viral at the time.