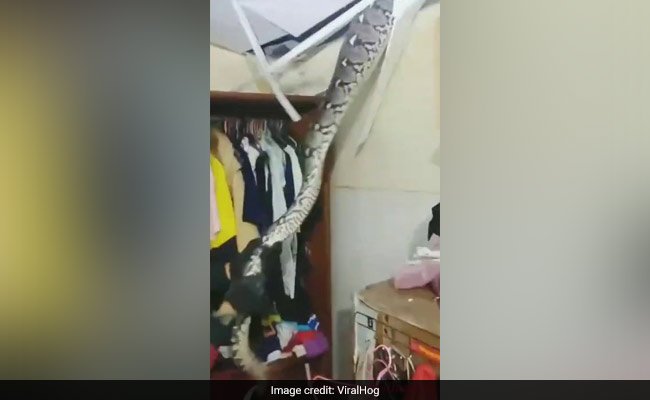 A massive snake was discovered inside a ceiling, leading to a chilling rescue operation.

Even spotting the odd house lizard perched lazily on the wall of one’s room is enough to send chills down the spine of several people. Imagine the horror then, when you discover a snake in your ceiling. And it’s not the tiny, garden variety that lost has its way or entered the house looking for some warmth. The owners of a house found an enormous snake that seemed a little too comfortable in its chosen spot. In a video shared by ViralHog on YouTube on August 6, the large reptile can be seen hidden inside the ceiling, when a rescue worker pokes a hole in the roof to extract it.

What follows next are a few scary moments of confrontation between the several-foot-long snake, whose species has not been specified, and the rescue expert. While the man holds the snake by its tail, the reptile turns around in a bid to attack him. Over the next few seconds, the man tries a variety of manoeuvres, including trying to distract the snake with his cap, but to no avail. While making continuous attempts to attack the man, the snake slithers off a chest of drawers it was previously perched on and moves on to the ground. Here, after a few failed turns, the man manages to catch the snake by its neck and move it outside the room.

“This massive snake was discovered inside the ceiling. This man carefully extracts the snake and removes it from the home,” read the video description, crediting the footage to a user named Skon N.

The video, as expected, elicited a range of responses from viewers. Several users were seen trying to guess where this could have occurred. “This must be in South Florida,” said one user named ‘Mystery Guest’, while another viewer named Maryam Meskienyar guessed that it was either Malaysia or Indonesia. The user also said, “Imagine if it came down while the family was sleeping, it could have easily eaten a child.”

Some users also noted that the snake was sporting a bulge, which made it possible that it had ingested something recently. One user, who goes by the name ‘MMA fight zone’, said, “Well you can see he had eaten something by the girth of his stomach,” to which a comment by Alovellyone said, “I noticed that as well. Hopefully, it was none of the owner’s pets or anything taken as a quick lunch. That would be tragic.”

Praising the rescue expert, a user named Zevra Luna commented, “Did he do a quick prayer at the start there? Cause that’s what it looked like. I don’t blame him, I’d be doing the same thing”.

In another incident that involved unsuspecting humans and snakes, a family in Georgia discovered that the space beneath their bed was home to not one but 18 snakes. The family discovered the nest of snakes when they found something “fuzzy” on the floor and tried to pick it up.

Finding a snake in your surroundings can be scary even for the most adventurous of people. And if this video is anything to go by, always take the help of an experienced rescue volunteer instead of trying to extract a snake yourself.