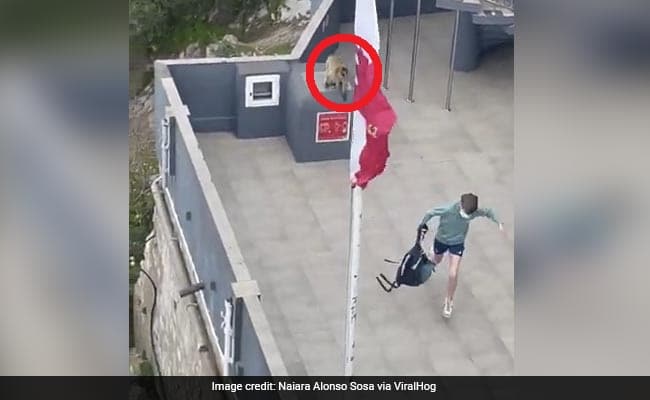 Monkeys can get nasty if things don’t go their way. Recently, a monkey appeared to have gotten angry with tourists in Gibraltar and was filmed chasing them away. The incident was recorded by Naiara Alonso Sosa at a tourist spot in Gibraltar and shared by ViralHog. In the 21-second video, we can see tourists being attacked by a monkey as they tried to climb a staircase.

The monkey latches onto the woman and tries to open her backpack to find something to eat. Scared, the woman shouts and tries to break free. Another tourist, who is just standing next to the woman, first appears confused about whether to intervene or not. He then pokes the monkey as the woman’s struggle continues.

The monkey does not appreciate the man’s gesture and turns towards him. Scared, he immediately tries to run upstairs but another monkey jumps in and blocks his way. The man then decides to run downstairs but the first monkey now targets his backpack. The animals finally chase both the tourists away.

The incident occurred on February 22, 2022, according to Naiara Alonso Sosa, who recorded it on camera.

“I recorded it when I went to Gibraltar because if there was a tourist with a backpack on their back, the monkeys would open it for them and in the end this time it was the funniest and it just so happened that I recorded it,” she said.

Shared on March 19, the viral video has been viewed over 1.25 lakh times on YouTube so far, and many people even left their comments.

“Maybe insensitive of me but I haven’t laughed like that for days,” wrote one user.

“Everyone laughing, but if a monkey grabs my mom and hurts her, I’ll be literally the 1st person on camera attempting to beat the hell out of the monkey. Until it leaves of course,” said another user.

One user shared an encounter with a monkey in Ooty. “I remember, when I was in Ooty, the monkeys just snatched the packet of biscuits from my hand. Yes, we shouldn’t feed them just like that. They are such adorable animals,” the user wrote.

“That was an attempted robbery, lol,” another user said of the monkey’s attempt to snatch the backpack.

“I love animals, but I’ve never trusted monkeys. I don’t know why people want pictures with them,” another wondered.