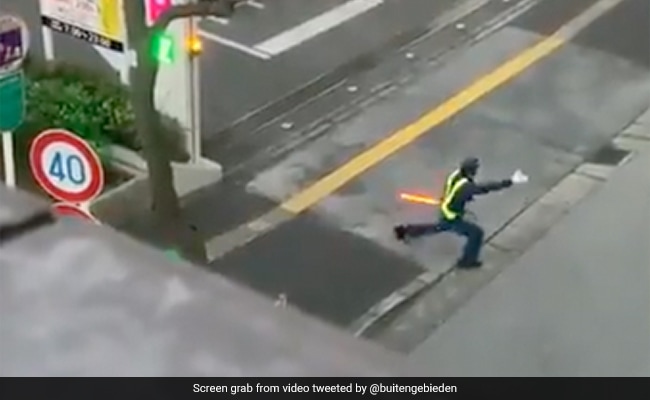 Internet users showered their love on the cop’s unique style

A traffic police personnel’s job is not easy as they have to brave harsh weather conditions and control the high volume of vehicles on the road, to ensure its smooth flow. It’s mostly a thankless job, yet many traffic cops do their duty diligently, and that too with enthusiasm. One such video has surfaced on Twitter that shows a traffic cop regulating pedestrians and cars, in a fun way.

The video has been shared by a popular Twitter account called Buitengebieden with a caption that reads, “He just loves his job” along with a laughing emoji.

He just loves his job.. 😅 pic.twitter.com/dYHmtFk8vO

The viral clip shows a traffic cop standing in the middle of a narrow point while gesturing pedestrians to cross the road, in an extremely jolly manner. While redirecting the cars, he jumps and swerves from side to side, making all kinds of lively gestures. While the location isn’t exactly known, many people in the comments section informed us that the footage is from Japan.

The video has amassed a whopping 13 lakh views, and 5,700 retweets since being shared on Wednesday. Some internet users showered their love on the cop’s unique style, while others were amazed to see his energy and incredible passion for his work. Many users also shared similar videos of other traffic cops doing their job in an amusing manner.

“You can have the worst job, the worst situation in life, but it’s your attitude and what you make of it, that makes the difference and inspires others,” one user wrote. Another commented, “It’s nice to see someone taking so much pride in his job, and he made it fun!” A third loved his spirit and wrote, “Gotta love what you do.. or no point to doing it. Besides he probably gets less angry people when he dancing and twirling and stuff – like a side bit of entertainment that brings a little smile or giggle to people who are probably just tired and want to get home/etc.”

Back in India, a Uttarakhand cop had gone viral last month, after a video showed him manning traffic with enthusiasm. In the video, Jogendra Kumar was seen blowing the whistle and gesturing to cars and two-wheelers crossing the area while dancing.