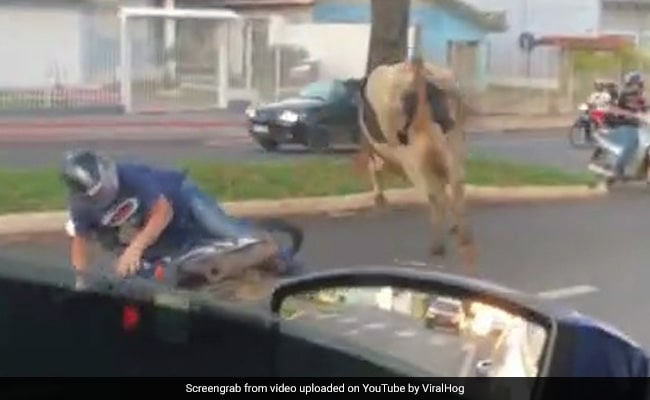 How many of you have heard about road accidents where a raging cow hits a vehicle? This is what just happened a few days ago in Brazil. A viral video doing the rounds on the Internet shows an unforeseen accident between a cow and a motorist. In the video, which was shared by the Youtube channel ViralHog, a raging cow suddenly runs onto a road from an adjoining street, shocking everyone.

While a pedestrian saves himself from getting knocked over by the cow, an incoming motorist doesn’t seem to be that lucky. Just when the cow runs across the road, a person on a motorcycle speeds towards it. In the turn of events, the mammal hits the motorcycle with its head and topples the vehicle. The motorist falls with his bike on the road while the cow turns away and moves elsewhere. The collision didn’t seem to have caused grave injuries to the motorist or the animal.

According to the caption, the incident took place on October 27 at Chapeco in Santa Catarina, Brazil. The recorder of the video sat in a car while this mishap happened. The note read, “I was in the street, inside the vehicle, waiting for a friend, when suddenly a cow passed and two men running after her, I took the cell phone and started recording, then she came running back from a terrain where she had entered and ended up colliding with the motorcyclist.”

The video has been viewed on the platform over 58,000 times on YouTube. It has been liked by around 1, 200 viewers.

Viewers are shocked as well as amused by the clip. A user wrote, “Now, that’s a block cowboys can be proud of,” reminding us of cowboy adventures as seen in Hollywood movies.

Another thought that this video was unbelievable. He wrote, “No photo, no one will ever believe this, that a cow, ran you over.”

“You can’t even tell anyone, they would never believe you,” wrote a person.

Though the accident was shocking, viewers agreed that it was funny.