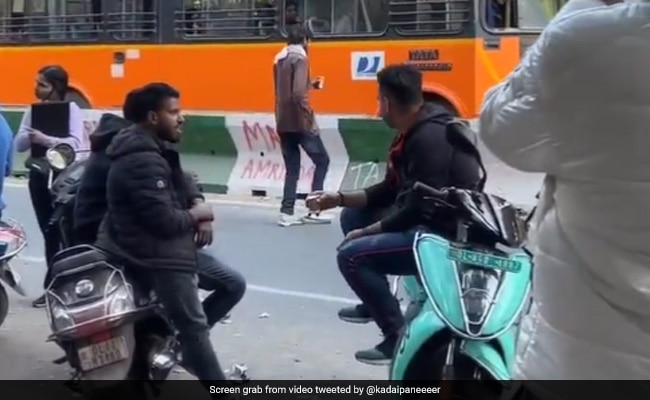 It’s true that Indians have a great love affair with chai. Enjoying a warm and soothing tea is one of the simplest pleasures of life for us. It also helps in beating the cold and chilly weather. Now, a video has surfaced on the internet which shows a driver of a Delhi Transport Corporation (DTC) bus taking a tea break after parking the bus in the middle of a busy road.

Posted by Shubh on Twitter, the video shows the driver running to a tea stall to get chai for himself. His craving for a cup of tea caused a massive jam and people can be seen honking angrily.

The driver soon realised that he has parked at the wrong spot. Further in the video, the man can be seen running towards the vehicle with a cup of tea in his hand.

A voiceover in the video says that the man ran towards Sudama tea stall, a famous tea stall on Delhi University’s north campus.

The caption of the video reads, “Men.”

The video was posted on January 2 and so far it has amassed nearly 70,000 views on Twitter with several likes and comments. The 25-second clip triggered an array of reactions. A user wrote, “Please suspend his license for a good amount of time Such acts if unpunished shall only lead to increasing in recurrences. We may take it as a meme/joke but such acts shouldn’t be encouraged.”

Another user commented, “Can’t blame him. Sudama tea is just this good.”

Will Rahul Gandhi’s Yatra Help Congress In UP? What Voters Say