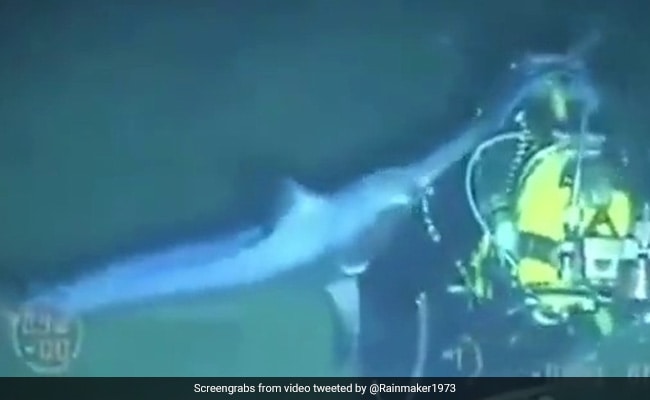 A shocking clip shows a diver being attacked by a swordfish.

An old video of a diver being attacked by a swordfish has resurfaced on Twitter, where it has again shocked thousands. A saturation diver, Paolo Eduardo, who was on a mission to make a minor repair on the seabed deep off the coast of Brazil, was attacked by swordfish. A video of the entire episode, which originally took place in April 2016, has resurfaced on social media.  Mr Eduardo was working from the diver-support vessel when the incident took place. For the unversed, saturation divers work deep underwater. They are specially trained to stay in a vessels to help fix, install, demolish and perform other exercises.

Coming back to the clip that has created quite a buzz on Twitter. Here, Mr Eduardo is busy with the repair work on the ocean floor. Moments later, the swordfish enters the frame. Its bill gets stuck to Mr  Eduardo’s diving equipment. Even after repeated attempts, the swordfish is unable to free itself. Mr Eduardo, who looks quite uncomfortable down there, can be seen moving towards the two-man bell set up, which was supplying him with oxygen.

The incident, which took place in April 2016, was recorded by a Remotely operated underwater vehicle (ROV), as per a report by Divernet.com. The timestamp, on the clip, has revealed some details about the diving vessel – Wyatt Candies, an American ship that was built in 2013.

When saturation diver Paolo Eduardo undertook a minor underwater repair on the seabed deep off the coast of Brazil, what he wasn’t expecting was a swordfish to come up behind him and impale itself on his bail-out rig [read more: https://t.co/G8OKmrAbCE] pic.twitter.com/PFv1nk6I7R

The clip has recorded 21k views on the social media platform. A person wrote, “Well, my scuba instructor lied to me then. He said sea creatures attack only when provoke.”

Well my scuba instructor lied to me then. He said sea creatures attack only when provoke.

Another said, “So it was actually going for him, damn. That would have been nasty”.

So it was actually going for him, damn! That would’ve been nasty

The report added that Mr Eduardo was unharmed during the entire episode. And, his oxygen supply was also in place.

Speaking about the incident, Fugro Brasil’s Subsea Services Director Andy Seymour said, “It was a very unusual operational incident and we were relieved that both the guy and the fish were swimming around at the end of it.”