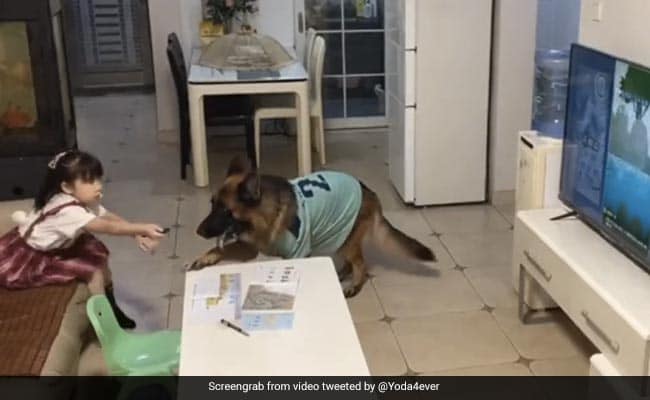 The video has amassed more than 5 lakh views

An adorable bond between a dog and a little girl has caught the attention of Internet users. An old video showing a pet dog reminding a little girl to do her homework has gone viral again. Posted on Twitter by Yoda4ever, the clip shows a German Shepherd acting as a lookout for his little human. The minute, the dog hear approaching footsteps, the pooch quickly alerted the girl watching TV at home and reminded her to do homework. The cute video is winning hearts online.

Along with the video, the caption reads, “Pawtners in crime.” Posted 1 day ago, the video has amassed more than 5 lakh views with several likes and comments.

The caption of the video reads, “You know it is cute that the dog alerts her and is basically her companion, but I can’t help but notice how he walks by her and the dog and doesn’t even acknowledge them. Like are you the dad and you are not even gonna say hi to your daughter when you just get home??? Sad man.”

“Unfortunately the good boi had no knowledge of the camera,” another comment reads.

The third user wrote, “Surely dogs have the mind growth of a small child!” “German shepherds never let you down,” the fourth user expressed.

Meanwhile, a video of a little boy playing football with his furry friend has surfaced on Twitter. Posted by Buitengebieden, the video is loaded with cuteness. “Having fun together,” read the caption of the video. The video captures the adorable moment of the little boy’s and the pup’s playtime. Well, don’t miss the dog’s ball-handling skills.