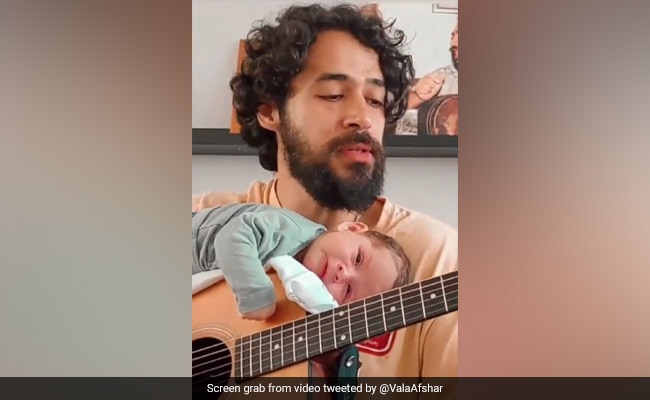 A heartwarming video showing a baby’s adorable reaction to his father’s soothing lullaby is melting hearts online. The video was shared on Twitter by user Vala Afshar, and since being posted it has garnered more than 312,000 views and over 1,400 likes.

In the short clip, the father is seen singing a soothing lullaby to his baby. The little child, on the other hand, is seen sitting on top of the guitar and looking calm, almost like he is about to fall asleep.

“‘Fathers are men who dared to place the world’s hopes and dreams in their children.’ Mahoor Mehdikhani singing a lullaby for his son,” the caption of the post read.

“Fathers are men who dared to place the world’s hopes and dreams in their children.”

In the comment section of the post, internet users lauded the father’s efforts for singing such a sweet song. “Parents are the energy that moves the world!! What will you not do for your wife and kids? There is not society if there is not families,” wrote one user. “One of the finest moments that anyone can aspire for,” said another.

A third user commented, “That is why I say that the music of strings is so relaxing, it gives joy to the spirit, it feeds the soul, it moves hearts, it opens feelings, it gives joy and it is a therapy for the soul and love.” A fourth added, “Your voice is golden so beautiful thanks for sharing.”

Meanwhile, previously, an image depicting a father’s love for his kids had gone viral on the internet. The picture showed a father’s love and concern for his child as he covered his little kid with his jacket while riding his motorcycle.

The image was shared on Twitter by a user named Dr. Ajayita with a caption that read, “Dads are underrated!” The photo garnered more than 4,000 likes and several comments.