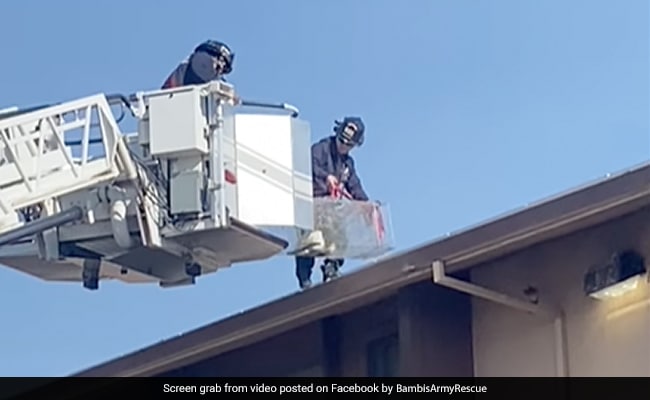 The cat was stranded without food or water for about five days.

Firefighters in California, US, rescued a lonely cat that had been abandoned on a building’s rooftop for five days and was starving and thirsty. Sammy the cat had to be rescued from the roof of an apartment building in Kingsburg, and firefighters encountered some difficulty getting there.

“The locals initially tried to rescue the cat by climbing up a roof, but the ladder was too short to reach the top of the structure. After this attempt, the Kingsburg Fire Department was summoned to the scene, and they were able to set a trap on the roof and bring Sammy back down to the ground,” reported the United Press International.

The video of the firefighters saving the cat from a rooftop was uploaded on Facebook by Bambi’s Army, an organisation dedicated to animal rescue.

“The cat has been rescued! It is off the roof and back on solid ground! A big thank you to the Kingsburg fire department and all those who turned out to help” Bambi’s Army Rescue said in a Facebook post.

This successful rescue not only brought relief to the locals and firefighters, but also to those who watched the rescue video on Facebook.