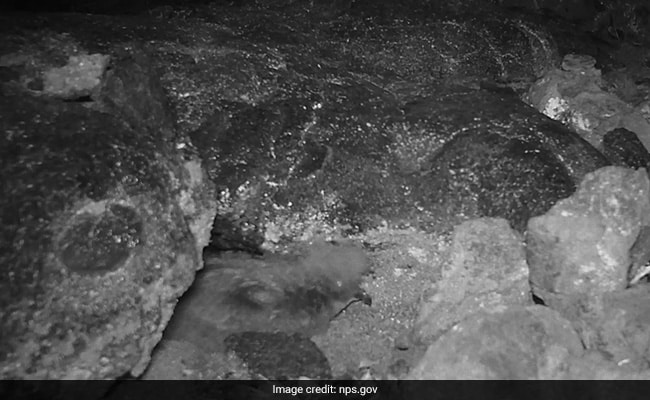 A wildlife camera captured a ‘ake’ake fledgling. Mauna Loa is home to its nest.

About a month before the volcano erupted, wildlife scientists discovered an endangered nocturnal seabird on Mauna Loa for the first time. According to the National Park Service, new footage of a young ‘ake’ake – or band-rumped storm petrel – shows the fluffy fledgling emerging from its high-elevation burrow on Mauna Loa, an exciting first for Hawaii Volcanoes National Park.

As per a news release, the ‘ake’ake burrow was detected in the park by a really good boy named Slater of Hawai’i Detector Dogs, under the guidance of trainer and handler Dr. Michelle Reynolds.

“This is the first confirmed ‘ake’ake nest identified in Hawai’i Volcanoes National Park,” according to Biologist Charlotte Forbes Perry, who observed the chick inside its burrow after Slater sniffed it out in September – weeks before it emerged.

“Biologists in the park have known of the presence of ‘ake’ake on Mauna Loa since the 1990s. In 2019, ‘ake’ake burrow calls were recorded during acoustic monitoring which indicated nesting. The lack of visual signs like guano at their nest sites make them extremely hard for humans to locate,” Forbes Perry said.

“We worked with Hawai’i Detector Dogs, and in two days, Slater located an ‘ake’ake’ nest and three Hawaiian petrel nests,” she added.

According to the American Bird Conservancy, ‘ake’ake, also known as the band-rumped storm petrel (Oceanodroma castro), are small (adults weigh about the same as a golf ball) and ash black with a wide white band on their squarish tail.

They lay their eggs on remote islands but spend the majority of their lives at sea. The global population is estimated to be around 150,000 people, with approximately 240 pairs known in Hawaii.

Truth vs Hype: Gujarat vs Himachal – The Modi Paradox