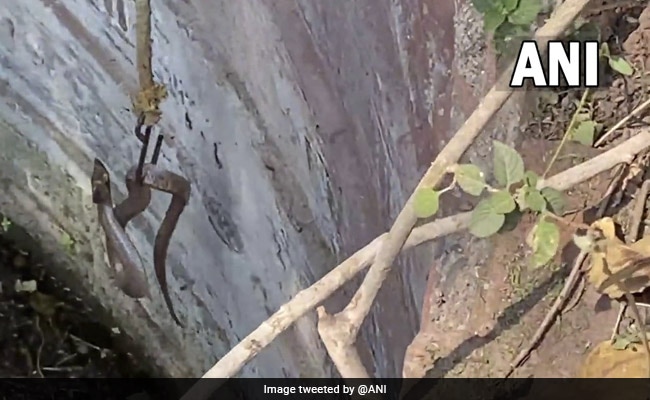 A spectacled cobra was rescued from a well in Nashik, Maharashtra.

An Indian spectacled cobra was rescued from an abandoned well in Nashik, Maharashtra, where it was found in an exhausted state. Volunteers of a non-government wildlife research organisation called Eco Echo Foundation received information on Saturday about the snake and reached the spot to rescue it.

“We received a call about a snake in a well,” Vaibhav Bhogale, a volunteer with Eco Echo Foundation, told news agency ANI in Hindi. “We don’t know how long the snake was in the abandoned well.

“When we reached the location, we saw the snake was exhausted and had no energy. The well was full of water and it had no platform to rest on,” Mr Bhogale told ANI. He said it was difficult for him and his team to go down the well to rescue the cobra, so they decided to use a rope to pull it up.

Footage shared on Twitter shows how volunteers worked to pull the two-foot-long snake out of the well before eventually releasing it back in the wild. The video has racked up over 33,000 views, with many Twitter users praising the rescuers for undertaking a tough and potentially dangerous job.

#WATCH | The volunteers of a non-government wildlife research organization rescued a highly venomous snake, an Indian spectacled cobra (Naag) from an abandoned well in the Nashik area of Maharashtra yesterday. pic.twitter.com/sgCm7ZeQ2V

The snake was identified as a spectacled cobra – a highly venomous species. According to Mr Bhogale, it a member of the “big four” – the four venomous snakes responsible for the most number of snakebites in India.

After being kept in observation for some time, the cobra was found to be in a stable state and released.