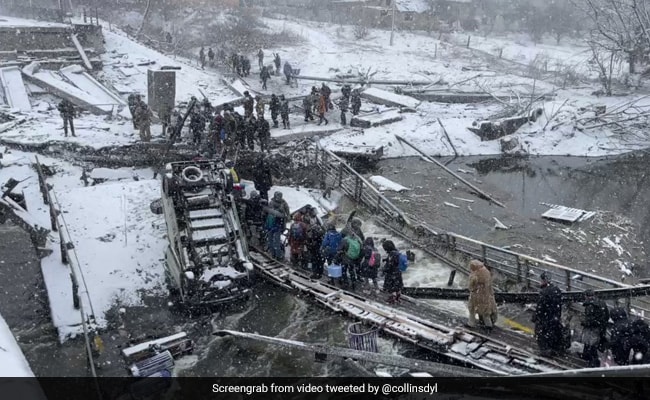 People evacuating from Bucha and Irpin areas northwest of Kyiv were seen crossing over the river on makeshift walkways of planks and mangled metal at the site of the bridge that was earlier destroyed in a bid to hamper any Russian advance.

A video tweeted by news agency AFP shows the civilians are forced to travel on foot with their belongings, children and pets, in icy wind and blinding snow.

Evacuations from #Irpin continue today in the blinding snow | #Ukarine#Kyiv@AFPpic.twitter.com/Sf3KvuoOHS

Intense shelling and airstrikes have caused heavy damage in and around the town. Russian troops are slowly encroaching on Kyiv despite intense efforts by outgunned Ukrainian forces, and moving faster through the east and north of the country.

Russia on Tuesday opened “humanitarian corridors” so people could be evacuated from Kyiv and four other Ukrainian cities: Cherhihiv, Sumy, Kharkiv and Mariupol.

Ukraine, however, accused Russia of attacking a corridor from the beleaguered southern port city of Mariupol, where aid workers said tens of thousands were living in “apocalyptic” conditions.

Kyiv has branded the corridors a publicity stunt as many of the exit routes lead into Russia or its ally Belarus. Both sides accuse each other of ceasefire violations.