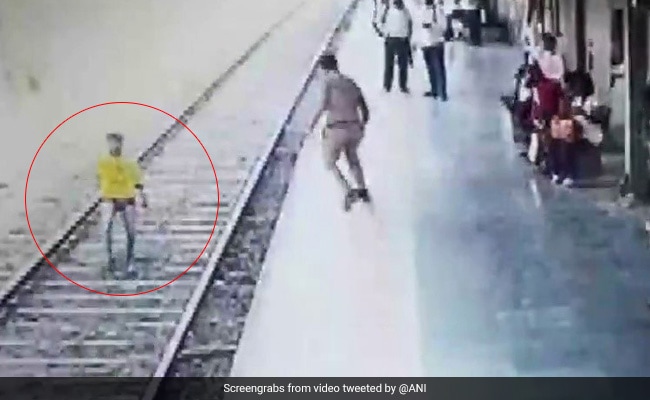 An alert policeman jumped into action to save a teenager’s life.

An alert policeman is being hailed as a hero for saving the life of a teenager who jumped onto the railway tracks as a train approached. The incident occurred at Vitthalwadi railway station in Thane district of Maharashtra on March 23, around 2.30 pm. CCTV footage of the incident shows the policeman risking his life to save the teenaged boy from being run over.

Shared by news agency ANI, the 33-second footage shows the teen, in a yellow shirt, standing on the edge of the platform. The policeman, too, is seen walking nearby. However, the teen seems to spot an approaching train, and jumps on the tracks. After losing his balance momentarily, he stands up and puts his hands back while facing the incoming train.

The policeman notices this and runs towards the railway tracks. Once near the edge of the platform, he hesitates for a split second, seeing the train arriving, but then jumps onto the tracks. He catches hold of the teen and pushes him to the other side of the tracks. Within seconds, the train passes the very spot where the teen was standing.

ANI captioned the post, “Maharashtra: A police personnel saved a teenage boy’s life by pushing him away from the railway track just seconds before an express train crossed the spot at Vitthalwadi railway station in Thane district.”

#WATCH | Maharashtra: A police personnel saved a teenage boy’s life by pushing him away from the railway track just seconds before an express train crossed the spot at Vitthalwadi railway station in Thane district. (23.03)

The video has been viewed over 2 lakh times within a few hours of being shared and over 8,000 users have liked it. Many users also hailed the heroic act of the policeman.

“Good man and a real gem. He didn’t hesitate for a minute,” wrote a user.

Good man and a Real gem ! He didn’t hesitate for a minute !

To which, another pointed out that he did hesitate but still deserved praise for rescuing the boy.

He did hesitate for a second, But can’t blame him coz that’s how human mind works ????

Awanish Sharan, an IAS officer, also shared the video and wrote, “Salute to the jawan.”

Another user said the policeman should be appropriately rewarded for his bravery.

Give that #police man a medal and appropriate reward! Thank you #MaharashtraPolice ????

One user compared the policeman to James Bond.

The teenager should be questioned on why he did this; was it for social media, or did he have some issues, if so should be provided with help. But first and foremost, super job by the policeman on duty, putting his own life in danger for the teenager.

Another heroic Moment. But It’s sad the way the youth trying to end his own life. Who is this brave police personnel

Earlier this month, the ticket-checking staff at Bihar’s Danapur railway station saved a young man who tried to end his life by climbing the roof of a train engine. He seemed to be reaching for the high-voltage, overhead electric cable. Crawling up the engine, one of the staff members wrapped a shawl around the man’s neck and dragged him down to safety.