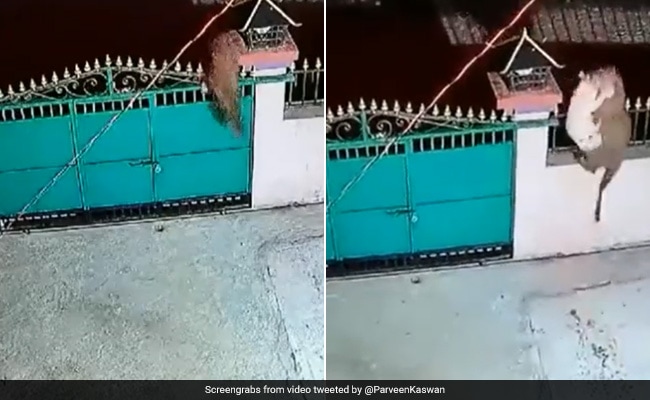 A leopard escapes with a family’s pet dog in this horrifying clip.

This is the shocking moment a leopard carried away a family’s pet dog after jumping over a gate. CCTV footage shared by Indian Forest Service officer Parveen Kaswan shows the leopard jumping over the locked gate and attacking the dog off-camera, before eventually making off with unfortunate canine. The undated video begins by showing the dog standing near the locked front gate of a house. Suddenly, as if scared by something, the dog begins running away at top speed. Moments later, the leopard jumps over the gate.

The horrifying video shows the leopard entering the house and going straight after the dog. A few seconds later, it was seen escaping with the dog gripped firmly in its mouth.

Sharing the clip on Twitter, Mr Kaswan wrote: “See that leopard. Others don’t stand a chance.” He added that he received the clip over WhatsApp.

See that leopard. Others don’t stand a chance. Via WA. pic.twitter.com/Ha3X9eBwWl

The video has racked up thousands of views since being shared on the microblogging platform.

In the comments section, Mr Kaswan said that leopards hunting dogs is a frequent occurrence in hilly areas. To prevent such attacks, some dog-owners make their pets wear an iron collar around their neck.

This is unusual sight for some. But in many regions including hilly areas Leopards usually hunt dogs. So local people keep a iron collar over their pets. Which save them.

Also in many regions stray dogs are huge trouble for leopards. One example from Reddit. pic.twitter.com/YFErLiD1VQ

I have a friend in hills.
His name is Chotu????
He is a local mountain dog, not too big.
Twice he fiercely fought leopard attacks, survived though grievously injured once.
Continues to live with dignity & courage though a bit tetchy!

Not in hilly belt sir pic.twitter.com/fRV5p0BpsI

Earlier this year, a dog in Karnataka miraculously survived after remaining stuck with a leopard in a toilet for hours.