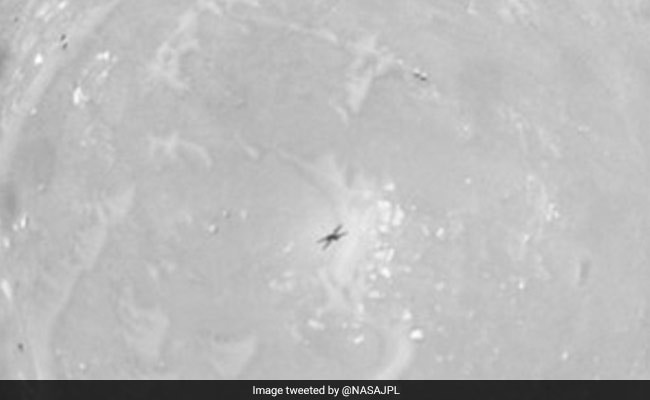 On its sixth test flight on Mars, a NASA helicopter suffered a navigation timing error that sent it into a wild tailspin over the Martian surface. It was the first problem the experimental helicopter, named Ingenuity, encountered since its historic first flight over the surface last month, NASA said. Its Jet Propulsion Lab (JPL) shared a GIF of the incident, which showed the helicopter wildly lurching in the air towards the end of its flight but the space agency said that it managed to land safely and was ready for its next flight. “Just keep flying,” NasaJPL captioned the tweet.

The space agency said that Ingenuity suffered an image processing issue at an altitude of 10 meters but “muscled through” the final 65 metres of its 215-metre journey and landed safely on Saturday.

Before landing, however, Ingenuity began adjusting its velocity and tilting back and forth in an oscillating pattern, which persisted throughout the rest of the flight. This glitch caused the aircraft to confuse its landing location but it landed within 5 metres of the intended arrival location, said Havard Grip, the chief pilot of the helicopter.

NASA said it is looking into the data and trying to address the issue. Ingenuity was sent to Mars aboard the Perseverance Rover, which reached the Red Planet in February this year. The rover landed in a region called Jezero Crater and moved about 20 metres away from the site. It then lowered Ingenuity to the ground and also took a selfie of the two of them on Mars.

The @NASAJPL team is all cheers as they receive video data from the @NASAPersevere rover of the Ingenuity #MarsHelicopter flight: pic.twitter.com/8eH4H6jGKs

Scientists had built the helicopter very light, with a mass of just 1.8kg to make it conform to the less gravitational pull on Mars. Ingenuity has two on-board cameras — a black-and-white camera pointing down to the ground and a high-resolution colour camera. The image that NASA tweeted on Friday appeared to have been captured by the first camera.