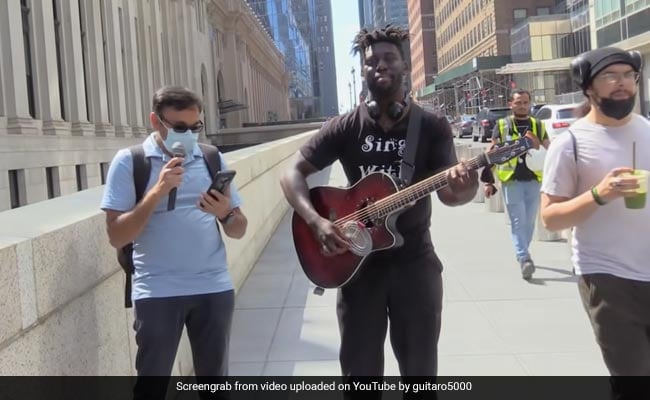 An American YouTuber carrying a guitar waited along a pathway in New York for a long time and repeatedly requested passers-by to sing with him for a vlog. An Indian man agreed to his request. Reginald Guillaume welcomed Gaurang Rakholia and they decided to sing Kishore Kumar’s famous song Dilbar mere kab tak mujhe, aise hi tadpaoge. Their video is now going viral with more than 4.3 million views. In the video, we see Guillaume learning the tune in just a few minutes, and then both of them appearing incredibly at ease while performing.

Initially, like many others, Gaurang had refused to sing, but he changed his mind and returned. “Oh, he’s coming back. How are you doing,” Guillaume asked Gaurang.

“I only know Hindi (songs),” Gaurang told him, and wondered how the American would sing it with him. Guillaume said “perfect”, and assured him that he would take only a few minutes to learn the tunes. Gaurang played the legendary singer’s song from the 1982 movie Satte Pe Satta on his mobile phone. Guillaume put on his headphones and listened to the song. A few minutes later, he was ready with his guitar. “I like it already,” he said. “Let’s do it.”

After singing, Guillaume said “dhanyavaad” and Gaurang responded with a “thank you”. Later, Gaurang commented on the post, saying he was really glad to do this.

“I am feeling really glad that I came back to sing with you! Reggie you are really awesome! I was literally in shock when you responded ‘perfect’ to what I said about knowing only Hindi (songs),” Gaurang said.

“Gaurang – You are trending in India. I love the fact that you rethought your decision after walking away and giving it a try as there is nothing to lose at all but to spread love through music,” commented Bryan Rodrigues.

“Gaurang’s leaving in a hurry and then coming back just touched my heart. And then he sang such a beautiful song amazingly!” said Winter Bear.

In the video description, the YouTuber said his “Sing With Me” series is “all about creating musical experiences” that make people happy and free. Guillaume said he has been making this vlog since 2018.

Falling Fan To ‘Floating’ Worker: 10 Videos That Made Our Jaws Drop