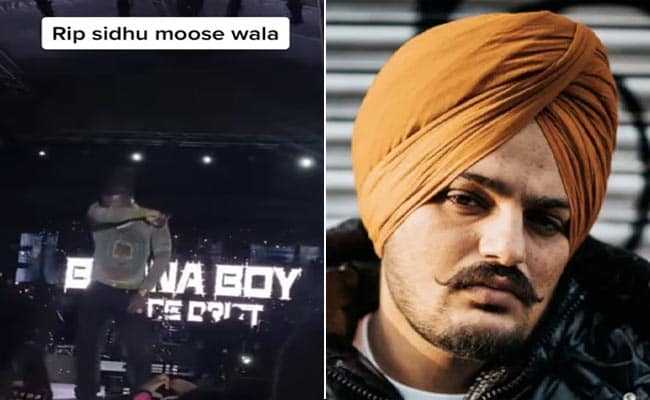 Sidhu Moose Wala was shot dead in Mansa on May 29.

Nigerian rapper Burna Boy paid a teary-eyed tribute during his concert to late Punjabi singer Sidhu Moose Wala. In a video shared on Instagram, Burna Boy, whose real name is Damini Ebunoluwa Ogulu, mentioned Sidhu Moose Wala’s name on the mic and broke down, hiding his face in his arm.

The Nigerian singer also went on to do Moose Wala’s signature step, where he hit his thigh and pointed a finger upwards. He then wiped his tears and moved around the stage, while the audience cheered for him as he performed.

Sidhu Moose Wala was shot dead in Mansa on May 29. After the video of Burna Boy paying tribute to the popular Punjabi singer went viral, fans were rather emotional and commented on the post, remembering the late singer-rapper.

One user even praised Burna Boy and wrote, “You were already one of my fav artists, but this took it to a whole diff level, respect brother.” Another said, “This gave goosebumps rest in peace,” while a third user added, “There will never be another like Sidhu Moose Wala”.

Previously as well, Burna Boy had paid a tribute to Moose Wala on Twitter. A day after the Punjabi singer was shot dead, he tweeted, “Legends never Die. RIP SIDHU MOOSE WALA.”

Moose Wala, whose real name was Shubhdeep Singh Sidhu, was shot dead by unidentified assailants in Jawahar Ke village of Punjab’s Mansa district. The incident took place a day after his security was withdrawn by the Punjab government. According to the post-mortem report, his body had 19 bullet wounds and he died within 15 minutes of being shot.

Several Bollywood celebrities, including Diljit Dosanjh, Ranveer Singh, and Swara Bhasker had paid tribute to Moose Wala after he was killed. The 28-year-old old had reached new heights of popularity with his songs like ‘295′, ‘Issa Jatt’ and ‘Dollar’. Moose Wala had also joined the Congress party and fought the Punjab Assembly election from Mansa. However, he was defeated by Aam Aadmi Party‘s Vijay Singh.