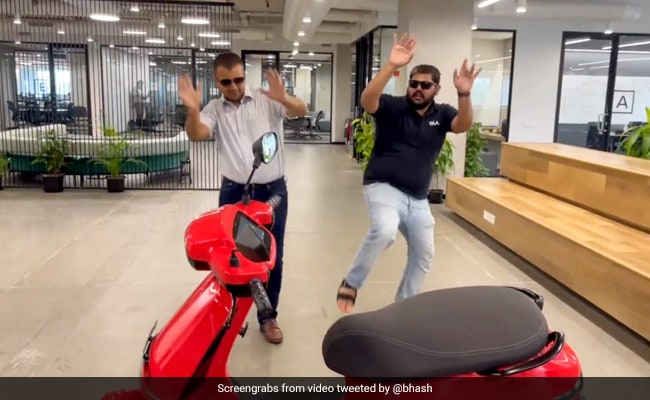 Ola CEO has shared a video in which he and Slokarth Dash, head of strategy, are dancing

Ola CEO Bhavish Aggarwal has given consumers a glimpse of the new operating system for the company’s electric scooters. Known as the MoveOS 2.0, the updated software is expected to come with Bluetooth connectivity and navigation on the screen. But what caught the Internet’s attention was the music feature.

Mr Aggarwal has shared a video in which he and Slokarth Dash, head of strategy and planning at Ola, are dancing to hit the Hardy Sandhu’s hit Punjabi number Bijlee Bijlee. And, as the camera takes a wider angle, we can see the Ola electric scooter.

Along with the fun video, Mr Aggarwal wrote, “Doing some final “expert testing” for the MoveOS 2 music feature.”

Some were curious about the launch date.

A user wrote, “Haha… Nice one… Come on now start sending the updates.”

Earlier, Mr Aggarwal posted about the new navigation feature of the Ola electric scooter. He gave a demo of the latest feature and wrote, “Taking the wife out for some ice cream.  Navigation on MoveOS 2 working great. Coming very soon to all.”

Taking the wife out for some ice cream! Navigation on MoveOS 2 working great ????????Coming very soon to all. pic.twitter.com/CUXh2mOQYQ

And, then Mr Aggarwal also shared a video on his way back from the ice-cream parlour. “Now, headed back home. Can you guess all the new features in this video?” read his post.

Now headed back home! Can you guess all the new features in this video?! pic.twitter.com/2FDCXacXqi

The MoveOS 2.0 will be rolled out by end of April. The announcement was made by Mr Aggarwal on Twitter.

MoveOS 2.0 is the first big update to the Ola electric scooter after it was launched in August last year.