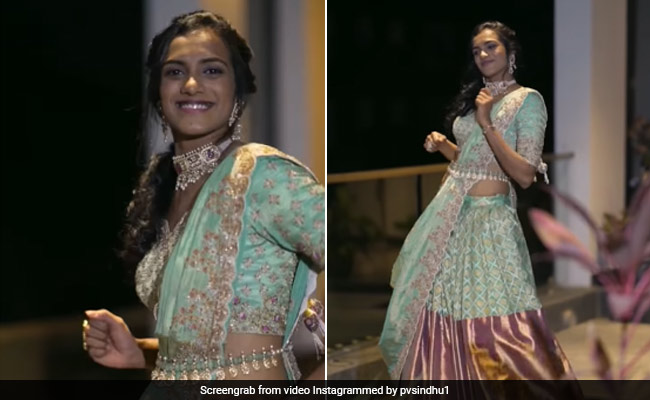 Shortly before she was conferred the Padma Bhushan, the country’s third-highest civilian award, badminton player PV Sindhu shared a glimpse of her Diwali celebrations on social media. The 26-year-old badminton star posted a clip of herself dancing to CKay’s ‘Love Nwantiti’ on Instagram this Sunday. Dressed in a sea green kanjeevaram lehenga, PV Sindhu shook a leg to the international chart-topping single which has taken over social media.

The dance video was shared as part of a series of Diwali posts. It has racked up 1.2 million views within a day of being posted on Instagram. Alongside the video, Ms Sindhu added a number of hashtags like “#traditional #dance #love #music #dancelove” and a diya emoji.

President Ram Nath Kovind on Monday conferred the Padma Bhushan on PV Sindhu in a ceremony at the Rashtrapati Bhavan in New Delhi.

“It is a proud moment. I am very thankful to the Government of India, all of the ministers and President sir for giving me this award. I am very very happy, these kinds of awards give us a lot of encouragement, support and motivation to do much better in the coming future,” PV Sindhu told ANI after receiving the Padma Bhushan award.

President Kovind Padma Bhushan to Kum. P.V. Sindhu for Sports. A leading Indian badminton player, she is the first Indian ever to become a badminton world champion. She has also won the silver medal at Rio Olympics. pic.twitter.com/32v07Hfd6H

PV Sindhu has already been the recipient of Padam Shri in 2015, India’s fourth-highest civilian award and highest sporting honour of India, Khel Ratna award in 2016.

With her bronze in the women’s singles competition at Tokyo Olympics 2020, she became the first woman from India to become a double Olympic medallist.

She is also one of the few celebrities from India who have joined the ‘Love Nwantiti’ craze – the song, by Nigerian singer CKay, is currently the number one song on YouTube’s Global Chart. It has over 1.1 crore views on YouTube and has been used in millions of Instagram Reels and TikTok videos.