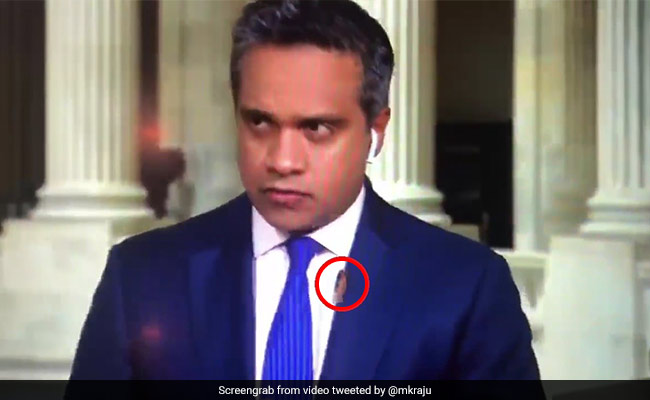 CNN reporter’s live shot gets interrupted by an unwelcome visitor

Reporting on live television can be challenging. The Internet is flooded with videos of journalists trying to do their job despite rude interruptions from passers-by, the weather playing spoilsport or, in some instances, curious animals getting a bit too close. And most times, given the nature of the job, these moments are caught on camera for the world to see. This is exactly what happened to a reporter, during his live shot in Washington. In a video, CNN reporter Manu Raju can be seen preparing to give his byte, while a large insect is crawling on his suit and making its way to his neck.

The insect that graced Mr Raju’s shot was a cicada, known to stay underground for two to 17 years. In the clip, the journalist is initially oblivious of the fact that the cicada is crawling on his suit. He only feels the insect once it reaches his neck. He instantly flicks it off his body and exclaims in shock. “Do I have more on me? Are they in my hair?” the reporter asks, as his colleagues assure him that there are none, between peals of laughter.

Sharing the video on Twitter, Mr Raju said, “Had an unwelcome visitor try to crawl into my live shot earlier.” The clip has garnered over 1.7 million views and nearly 47,000 likes within a few hours of uploading.

Had an unwelcome visitor try to crawl into my live shot earlier. pic.twitter.com/Pu68z0cWSN

Responding to the tweet, some users shared other popular videos of reporters and their unfortunate trysts with bugs and insects.

LOL, Manu! I have to say you really kept your cool. I think many other folks would have been like that Florida weatherman who saw a cockroach and flipped out!

Those cicadas are no jokes. pic.twitter.com/mcGEmZuq2q

Elie Honig even nominated his college for the “best live shot animal moment”.

It’s gonna come down to you vs @abbydphillip (lizard attack in Florida) vs. @joejohnscnn (a rodent of some kind outside the White House) for best live shot animal moment.

Several Twitter users also wondered why none of his colleagues warned him about the bug sooner.

Does everyone who works with you hate you? Why would no one point out the giant nightmare bug as it CRAWLED TOWARD YOUR FACE?

who did you piss off in the control room that it took them so long to tell you? ????

“Was nobody gonna say anything?” asked a user.

was nobody gonna say anything??

Some even referred to Mr Raju’s “murderous look” upon sensing the cicada.

That murderous look you shot at the camera is pretty comical ???? pic.twitter.com/0H3CZMxI1O

“This is 100% the right reaction,” said a user about the way Mr Raju responded to the situation.

This is 100% the right reaction. The judges would also have accepted “screaming like a little girl” https://t.co/NBDRyKqiqW

Another viewer confessed that the journalist “handled this way better” than she would have and added the hashtag cicadapocalypse.

Manu handled this way better than I would have… #cicadapocalypsehttps://t.co/L1XIoDqUcl

“No cicadas were harmed during the filming of this segment,” a user added cheekily.

“No cicadas were harmed during the filming of this segment …” @mkraju@CNNhttps://t.co/d2dyfz9ZcS

Tell us what you think of the reporter’s “creepy” cicada encounter.