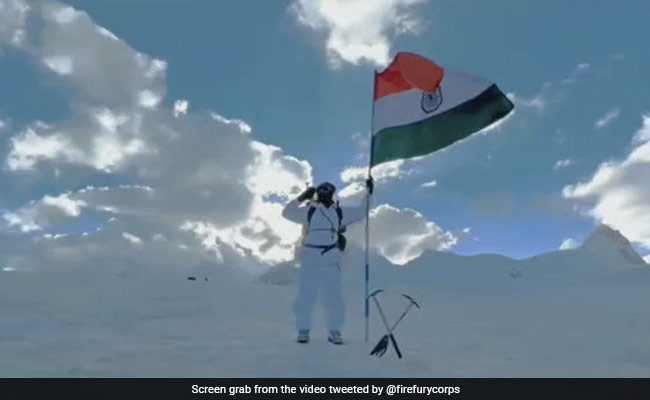 Siachen Warriors celebrate Independence Day 2022 at the Highest Battlefield of the world.

As India celebrated its 76th Independence Day, the Indian Army troops celebrated the day at the world’s highest battlefield at the Siachen glacier.

After unfurling the National Flag, the soldiers at Siachen glacier recited the National Anthem on the occasion of Independence Day.

The Fire and Fury Corps of the Indian Army shared the video on Twitter showing Siachen Warriors walking with the national flag and hoisting it.

‘TRICOLOUR AT THE HIGHEST BATTLEFIELD’#SiachenWarriors celebrate #IndependenceDay2022 at the Highest Battlefield of world@adgpi@NorthernComd_IA@lg_ladakh@ANI@jtnladakh@ddnewsladakh@LadakhTimes@prasarbharti@PIB_India@ChinarcorpsIA@Whiteknight_IApic.twitter.com/Z7Iu3bszui

The Ministry of Culture also shared the video and said wrote, “Our brave Indian Army soldiers celebrate the country’s 76th Independence Day by hoisting our Tiranga at the Siachen Glacier and reciting the national anthem.”

The Indo-Tibetan Border Police (ITBP) personnel also celebrated Independence Day near a mountain peak at 18,800 feet in Sikkim, marking a unique record in the field of mountaineering. The Himveers of ITBP scaled 75 peaks simultaneously and hoisted the national flag atop as part of ‘Amritarohan.’

“ITBP jawans celebrating the Independence Day near a mountain peak at 18,800 feet in Sikkim. Marking a unique record in the field of Mountaineering, the Himveers of ITBP have today scaled 75 peaks simultaneously and hoisted National Flag atop as mission ‘Amritarohan’,” the ITBP said in a tweet.

Similarly, ITBP personnel marked the occasion of 75 years of Independence at the banks of Pangong Tso in Ladakh and in the Tawang region of Arunachal Pradesh.

Addressing the nation from the ramparts of the Red Fort on the 76th Independence Day, the Prime Minister took aim at the twin evils of nepotism and corruption and sought the people’s cooperation to fight them.

The prime minister said that the country needs to shift its mentality from “Bhai-Bhatijawad” and Parivaarwad (nepotism) and give an opportunity to the citizens who deserve it.

The Prime Minister said that there is no place for corruption in our society and that the people of the country need to come together as a society to punish those who have propagated the evil of corruption.

“Today the nation shows anger towards corruption, but not the corrupted. Until and unless, people have the mentality of penalizing the corrupt, the nation cannot progress at optimum pace,” Prime Minster Modi said.

Prime Minister Modi, while addressing the nation for the ninth time from the ramparts of the Red Fort on the occasion of Independence Day, urged the youth to dedicate the next 25 years of their lives for the development of the nation and highlighted five pleges ‘Panch prans to fulfil the freedom fighters’ dreams by the year 2047.

The idea behind the initiative is to invoke the feeling of patriotism in the hearts of the people and promote awareness about the tricolour.

Earlier, Indian citizens were not allowed to hoist the National Flag except on selected occasions. This changed after a decade-long legal battle by industrialist Naveen Jindal culminated in the landmark SC judgment of January 23, 2004, that declared that the right to fly the National Flag freely with respect and dignity is a fundamental right of an Indian citizen within the meaning of Article 19(1) (a) of the Constitution of India.

Lauding the Central Government and PM Modi for the Har Ghar Tiranga Campaign, Naveen Jindal has appealed to every Indian to make ‘Har Din Tiranga’ their motto.