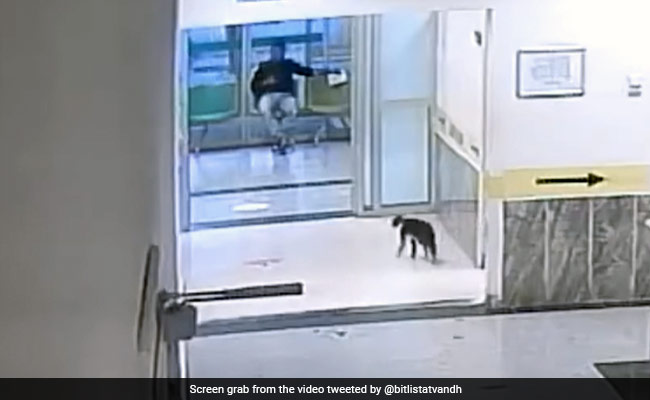 The stray cat was later named “Davso” by the staff

A public hospital in East Tukey had an unexpected visitor last week when an injured stray cat was seen wandering in the premises, apparently in search of assistance. The cat was captured on security cameras entering the hospital in the city of Tatvan, in the Bitlis district, through the emergency entrance. Bitlis Tatvan State Hospital, where the cat visited, took to Facebook to share the unusual video.

The video shows the black-and-white cat limping and hobbling, as it makes its way into the hospital. She wanders around the corridors until someone spots it and comes to its aid. Thankfully, Nurse Abuzer Ozdemir saw the cat was suffering and in pain and rushed to its assistance. The clip then cuts to show the kitty sitting on a chair, and the nurse tending to its injuries.

“While I was working, I saw a cat walk in and it was staggering. When I picked it up for examination, I noticed that his foot was broken, and I put it in a splint (medical product used to keep organs still). I kept the cat under surveillance for a while. Then the cat relaxed and went out again from where it came, as if it knew the way,” nurse Abuzer Ozdemir told news outlet Enson Haber. The nurse also added that the cat returned after a few days and got its paw reexamined.

It’s unclear exactly where the cat had come from, or what might have caused its injury. The animal was later named “Davso” by the staff, inheriting the name of a cat they adopted earlier that died of natural causes.

Earlier this year, a similar story surfaced from Bihar where a monkey was seen visiting a clinic in Sasaram to get her wounds treated. A video of the incident that went gone viral showed the monkey at the clinic along with her child. People rubbed their eyes in disbelief as a crowd gathered to see the monkey patiently waiting for the doctor.