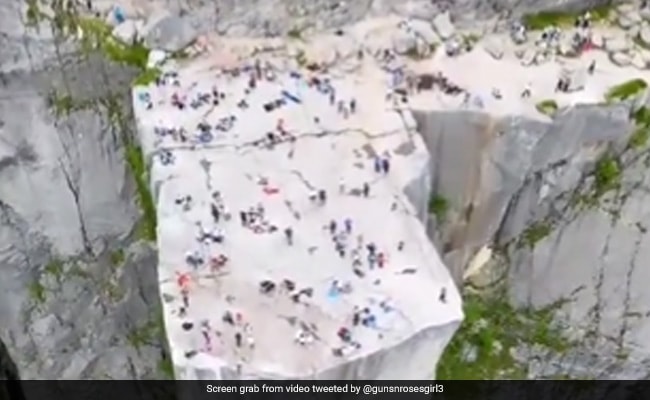 Some of Nature’s creations are truly impressive and breathtaking, just waiting to be appreciated. However, at the same time, such creations can be scary and fill you with a sense of wonder. One such location is Norway’s iconic Preikestolen, also known as Pulpit Rock, which offers a breathtaking cliffside view as a backdrop. The famed mountaintop site was also featured in the Tom Cruise-starrer movie ‘Mission: Impossible – Fallout’, and served as the film’s last thrilling locale.

Pulpit Rock is a unique square-shaped rocky cliff 604 metres above sea level that looks over Norway’s Lysefjord. Owing to the fact that there are no railings or barricades surrounding the cliffside, it poses a certain degree of thrill and risk. The rock is especially known for its uniform flat surface, which measures 82 feet by 82 feet. (25 by 25 metres).

Now, a video capturing a stunning aerial view of the location, with several people standing on it, has surfaced on Twitter, leaving people in awe. The video posted by Science Girl was captioned, “‘In the Southwestern tip of Norway is a near vertical cliff with a flat plateau, with incredible views over Lysefjord. This is called pulpit rock.”

In the Southwestern tip of Norway is a near vertical cliff with a flat plateaux, with incredible views over Lysefjord.

This is called pulpit rockpic.twitter.com/WTQXx8JX86

The 16-second video has gone viral, amassing 20 lakh views, more than 27,000 likes and over 4600 retweets and quote-tweets. People in the comments section also posted more breathtaking pictures of the scenic location and shared their experiences of hiking up to Pulpit Rock.

My favorite picture was there.. Preikestolen ❤️ pic.twitter.com/wPKZAnMjXb

Me and my pup up there 3days ago pic.twitter.com/uz1ekAguDT

While many travel enthusiasts expressed their desire to visit the Rock, others said that the steep cliff was anxiety-inducing for them.

One user wrote, “I’m freaking out, literally, just watching and reading this. I can feel it in my legs.  I have the urge to lie flat on the floor.  Of my living room.” Another said, “The smartest people to ever exist could not convince me that thing isn’t minutes away from falling off.” Others wondered why there aren’t any railings or fences while some noticed the deep fissure in the cliff might eventually give rise to safety concerns.  A third said, “Can’t help but notice there’s a great big crack at the back of that square!”

However, the location is pretty popular, attracting plenty of people every day during peak months. According to VisitNorway.Com, the hike to Preikestolen is a total of eight kilometres, and the round trip takes four hours. The hike is graded as medium difficulty.