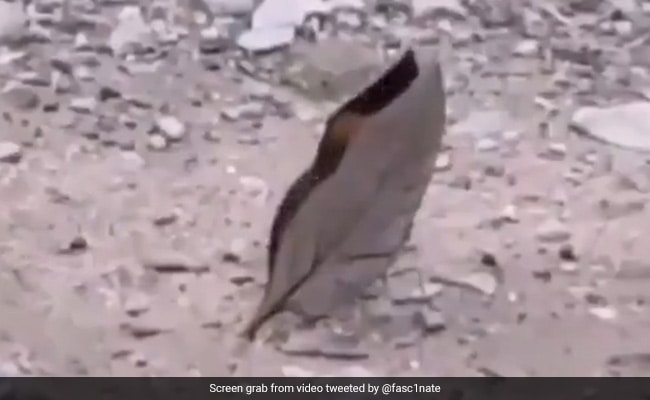 Internet users were stunned to watch the beautiful camouflage display

The animal kingdom undoubtedly offers some of the most entertaining and fascinating videos. One such video that has left people mesmerised is of a butterfly and its perfect camouflage technique. Notably, different species develop their own special defense mechanisms that are crucial for their survival. One such example is Kallima inachus butterfly, which closely resembles a dried tree leaf, when its wings are closed.

A Twitter account called Fascinating shared the video and wrote, ”Incredible camouflage of the Kallima inachus butterfly.” When its wings are closed, the butterfly looks exactly like a dried autumn leaf, giving it the cleverest camouflage. However, when its wings are open, it reveals a luminous colour pattern.

Since being shared, the video has garnered a whopping 1 crore 12 lakh views, more than 20,000 retweets, and around 2.2 lakh views. Internet users were stunned to watch the beautiful camouflage display and left a variety of comments.

One user wrote, ” I don’t know how someone can see something like this and not be amazed by evolution.” Another commented, ” When I watch such videos, I get a sense of awe that makes me wonder how is it that evolution gets these patters so perfect? I understand that it happens across millions of years and I guess that increases the probability, but I still believe something else is at play.” A third wrote, ”Imagine just looking at a leaf on the floor and then it opens up to show bright orange and blue, that would be a surprise.”

The butterfly, known as Kallima inachus, is a species of nymphalid butterfly found in India and Japan. These butterflies protect themselves through camouflage by folding up their wings and blending in with their surrounding, according to National Geographic. Through this strategy, known as crypsis, they become nearly invisible to predators. Apart from being experts at disguise, Kallima inachus is also known for its two distinct forms, depending on the season.