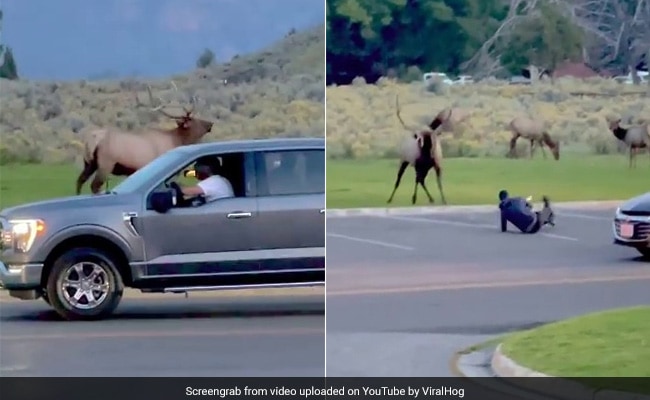 Have you ever had a bull elk charging at you? Just the thought alone is enough to make your heart skip a beat, right? But if you have been lucky to have not faced such a situation in your life so far, this video will be enough to scare you. A tourist in Yellowstone National Park, US, recently decided to get a close look at a herd of bull elk, ignoring all warnings. The result? One of the bull elks decided to give him a run for his life. The video was shared by the YouTube channel ViralHog on Friday.

It shows one of the bull elks keeping an eye on the herd from close to a road. The animal turns the other way as soon as a vehicle stops near the herd. Soon, the animal gains speed.

Passing several tourists, who were trying to capture it on their cameras, the bull elk nears its target. By the time, the tourist realises how close he is, the giant bull elk comes dangerously close to him. The man scrambles and stumbles onto the road, right in front of a moving vehicle. He then collects himself and manages to walk away. The elk, too, stops giving him chase.

The video has, so far, been viewed over 57,000 times on YouTube, and many people shared their interesting take on the incident.

“And this is why they tell you when you enter Yellowstone to stay in your car if there are animals,” one user commented.

“When you have zero survival instinct, death comes towards you and you stumble over yourself,” said another.

A third user said though the man fell to the ground, he somehow protected his phone the entire time, calling into question his priorities.

“Some people just don’t learn when you are in or up against a wild animal,” commented another user.

Some said the bull was only trying to be protective of its herd.

Tourists at Yellowstone National Park have been warned to keep their distance from elks as the animals can be dangerous during mating season.