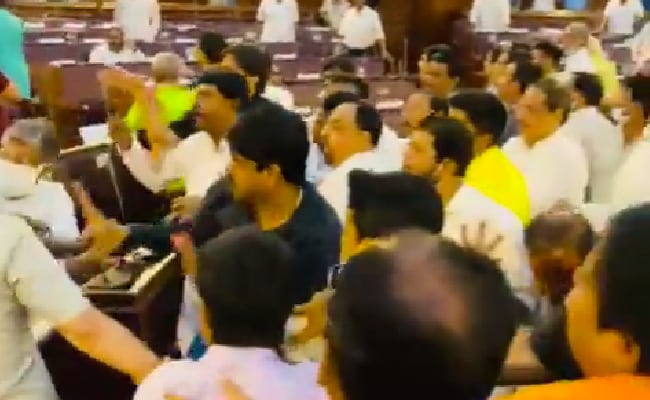 A Trinamool MLA was rushed to the hospital after the fight

Chaotic scenes were witnessed in West Bengal Assembly today as legislators of the ruling Trinamool Congress and the Opposition BJP came to blows after the BJP demanded that Chief Minister Mamata Banerjee speak in the House over the state’s law and order situation.

This comes against the backdrop of the ghastly killings in Birbhum district’s Rampurhat where eight members of a family, including five women and two children, were assaulted and then burnt to death. The incident is alleged to be a retaliation after a local Trinamool Congress leader, Bhadu Sheikh, was killed in a crude bomb attack. Following an intervention by the Calcutta High Court, the CBI is probing the killings.

In a video shared on social media by BJP leaders, including its IT cell chief Amit Malviya and spokesperson Shehzad Jai Hind, several MLAs are seen locked in a scuffle on the floor of the House as marshals and police officers struggle to stop the fight.

Absolute pandemonium in the West Bengal Assembly. After Bengal Governor, TMC MLAs now assault BJP MLAs, including Chief Whip Manoj Tigga, as they were demanding a discussion on the Rampurhat massacre on the floor of the house.

What is Mamata Banerjee trying to hide? pic.twitter.com/umyJhp0jnE

Trinamool MLA Asit Majumdar, who suffered a nose injury in the fight and was rushed to the hospital, alleged that the Leader of Opposition, BJP’s Suvendu Adhikari, punched him.

Mr Adhikari and four other BJP legislators have been suspended for the whole of this year following the ruckus.

“The Opposition had demanded a discussion over law and order and the government declined. They brought Kolkata police personnel in civil dress to clash with our MLAs,” Mr Adhikari told the media.

“MLAs are not safe even inside the assembly. At least 8-10 of our legislators were beaten up, including Chief Whip Manoj Tigga, by some TMC MLAs,” he added.

Trinamool leader and state minister Firhad Hakim, however, put the blame on the BJP. “Some of our MLAs were injured inside the House. We condemn the conduct of the BJP,” he said.