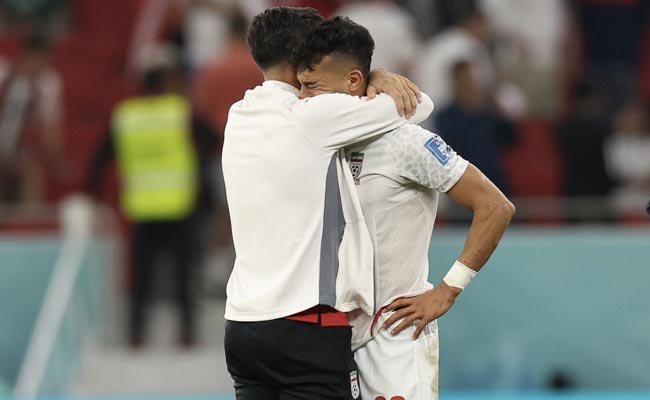 Iran’s FIFA World Cup journey ended after United States defeated the team 1-0 in Wednesday’s match. But a gesture shown by an American player is winning hearts online. Shortly after booting Iran out of the World Cup, a clip on Twitter showed Team USA football player Antonee Robinson hugging Iranian opponent Ramin Rezian. The US victory sent Iran out of the World Cup and ensured the Islamic republic’s arch enemy a place in the knockout phase of the tournament in Qatar.

Rezian is seen crying after his team’s shocking defeat and hugs Robinson tightly as rest of the team moves around in the ground.

The emotional hug was celebrated by many Twitter users.

“Back in the Shah days, I worked with a lot of Iranians who were in college in Boston (as I was) and they were the best and nicest colleagues en masse that I’ve ever had. A shame what religion has done to both our countries,” one Twitter user said.

“The best of humanity on display: after USA defeated Iran in the World Cup, the players shared an emotional moment, showing how sportsmanship can transcend geopolitics,” another one said.

Meanwhile, people in Iran celebrated their team’s defeat to the US in the FIFA World Cup. In the hometown of 22-year-old Kurdish woman Mahsa Amini, whose death in September triggered widespread protests in Iran, protesters let off fireworks.

A video shared on Twitter by Kurdish activist Kaveh Ghoreishi showed a neighbourhood at night in Sanandaj city with sounds of cheering and horns blaring after the United States scored what was the only goal of the match.

Telangana Tussle: KCR Vs The Rest?