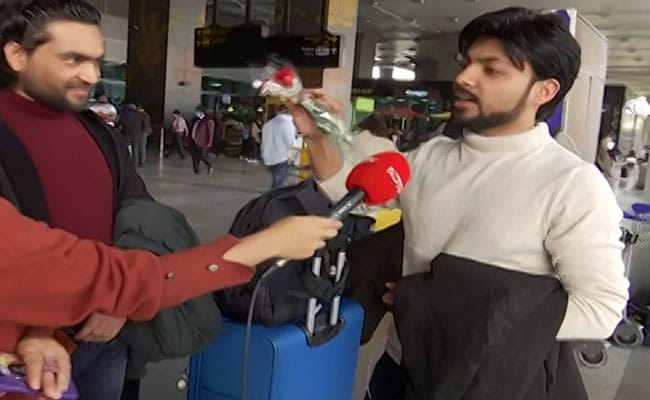 An Indian student back from war-hit Ukraine strongly criticised the government today, saying gestures like distributing flowers are pointless when timely steps were not taken to rescue citizens from the conflict zone.

Divyanshu Singh, who is from Motihari in Bihar, had crossed over to Hungary after fighting began in Ukraine. This afternoon, he landed in Delhi and was greeted with a rose.

Asked if they received help from the Indian embassy in Ukraine, he told NDTV, “We received help only after we crossed the border into Hungary. There was no help before that. Whatever we did, we did on our own. Ten of us formed a group and boarded a train. The train was packed.”

There have been reports of Indian students facing harassment while trying to board trains or cross the border, but Mr Singh said they received help from local residents. “Local people helped us. No one misbehaved with us. It’s true that some students faced harassment at the Poland border. Our government is responsible for that. If it had taken action at the right time, we would not face so many problems. The US was the first to ask its citizens to leave,” he added.

Holding up the rose given to him after he landed in Delhi, the Indian student said, “Now that we are here, we are being given this. What is the point? What will we do with this? What would our families do if something happened to us there?”

Mr Singh said they acted in time and others who followed them had a roadmap and faced less difficulties.

He said the government would not need to distribute flowers now if it had acted in time. “Such displays would not be needed if there was timely action. Our families were very worried.”

Union Civil Aviation Minister Jyotiraditya Scindia has said that 3,726 Indians will be brought back today on eight flights from Bucharest, two from Suceava, also in Romania, one from Slovakia’s Kosice, five from Hungary’s Budapest and three from Poland’s Rzeszow

Four Air Force aircraft with 798 Indians on board landed at the Hindon airbase near Delhi today. A flight from Bucharest with 183 Indians onboard has landed in Mumbai.

The centre’s ministers have been greeting the returning students with chants of “Bharat Mata ki Jai” and flowers.